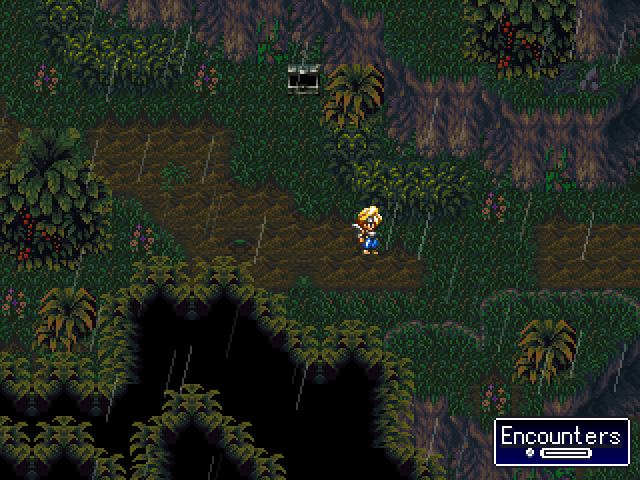 I first read about Chain of Retribution over at IndieRPGs, and at first it looked like a fairly standard Japanese-style role-playing game made using RPGMaker. But what caught my attention is that it is apparently a “chain game”, meaning that one developer worked on it and then passed it on to another, who continued working on it, before passing it on again, and so forth. Apparently a total of seven people worked on the game in succession to create the final product.

This intrigued me. How would it work? Did the developers plan everything out beforehand? Or did each one write the next part of the story themselves? Would the game veer off in a completely different direction than the first developer intended? Was there any collaboration on gameplay systems and graphics, or was that all set up by the first person in line? The web page for the game doesn’t answer any of these questions, so I decided to try the game and see for myself.

My first impression was of a fairly standard JRPG. Graphics are borrowed from other games, but have a consistent pixellated style that works well. I was pleased to see that character movement speed is quite fast so I didn’t ever feel like I had to laboriously trudge anywhere. Combat takes place on a separate screen with a side-on view that will be instantly familiar to anyone who’s played the early Final Fantasy games, and uses a similar “action timer” for assigning turns to various characters. In a nice twist, characters always start battles with full health, so there’s no need for tedious healing between fights. This means that each battle can be its own isolated challenge.

The writing is quite funny, with characters mocking both each other and various JRPG conventions, like the fact that there are chests full of treasure lying around everywhere. This lighthearted tone fit the general level design as well, with areas providing simple, linear paths strewn with chests and some enemy encounters (which can be seen on the screen; no random battles here). Most battles were quite easy, with only the boss encounters providing much challenge. Until everything suddenly changed. 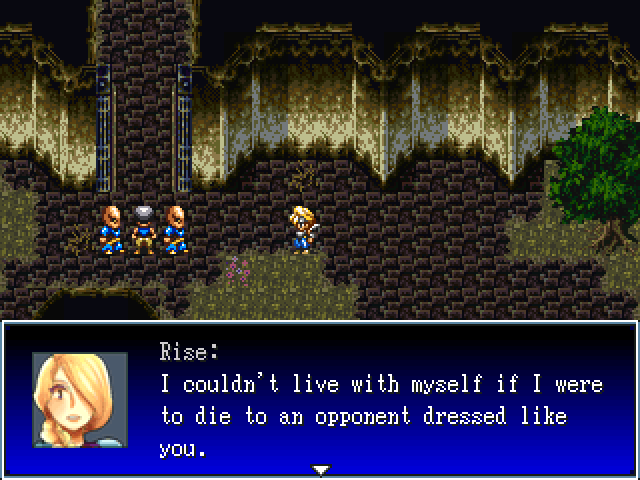 A whole bunch of exposition dropped all at once, and there was a marked change in the tone of the writing. Surely this is the first changeover to a new author? But the major plot twist had been foreshadowed at the start of the game. Had the various authors discussed the plot points beforehand? A short time later I was facing a dungeon area with a very different design to what I’d seen before, tasking me with exploring in all directions to activate a series of bridges. At the same time I was learning a whole slew of new info about the world, in a rapid and often slightly clumsy fashion. And getting into fights. But this time, the fights were hard. I was having to save before each one because a little bad luck could easily lead to my party getting eliminated. Fortunately, the difficulty abated a little as I moved on. The game took on a darker, more serious tone as I traveled and met several new characters.

Then everything changed again. Once more, a bunch of exposition was delivered all at once, and the writing changed from serious to silly. A character who had previously been tight-lipped and mysterious (and lightly mocked for it by the others) became openly lecherous, in an almost slapstick fashion. Another character who had been vehemently denying having any sort of romantic interest in a certain lady was now open about it, and the others who totally suspected it before inexplicably acted surprised. For the main plot, however, the serious tone was retained, creating a mix that oscillated from gravitas to wisecracks. Gameplay was also expanded a bit, allowing the creation of two separate parties who must work together to navigate a trap-filled area. 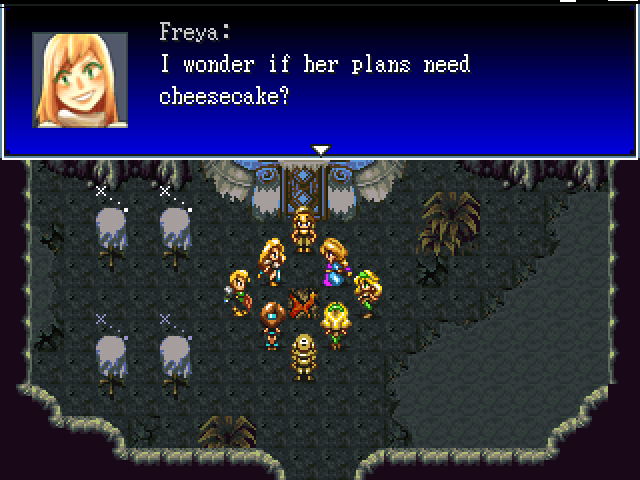 That’s about where I am at the moment, but I can’t help but wonder if I’ve only seen three of the seven developers’ work, or if there were more changeovers in there that I couldn’t detect. Maybe only some of them took the game in a different direction, while others were able to add to it seamlessly? I’ll write more once I’ve seen how it all turns out. The game is free, for those who might be interested. So far I’ve found the chain game aspect to be the only really interesting thing about it — it’s highly linear, to the point that the world map sections are basically a joke, and it doesn’t do much to set itself apart from other games in the genre in its gameplay or plot. But taken as a strange experiment in communal design, I find it rather fascinating. Maybe you will too.

New Skyjacker Kickstarter Is Up