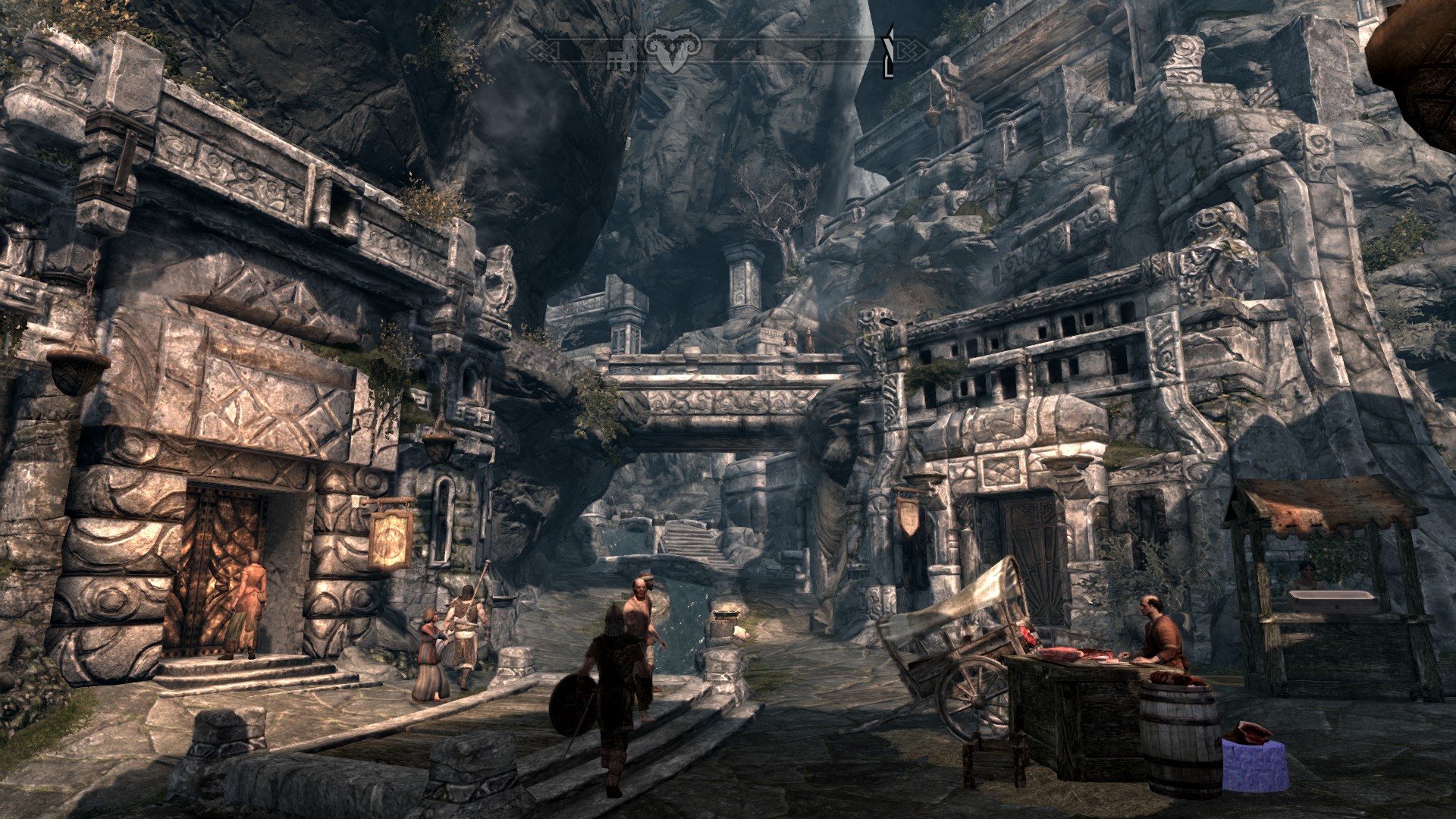 My Skyrim character has now been to seven of Skyrim’s nine cities, although two of those were more like villages. I’ve heard a lot of complaints from players about the cities, but I’ve actually quite enjoyed them so far. Cities in role-playing games are always tricky things, as many players will simply be interested in them for their most basic functions: buying things, selling things, and getting quests. In many RPGs, this is all that the cities are — a few traders and quest-givers, surrounded by unimportant stuff that’s shaped like a city. Getting the cities to feel more like real places is the hard part. Some games (like The Witcher) are set almost entirely in and around a single city, to really flesh it out, while others more closely resemble Skyrim in that they feature several cities and the land in between, and have to work with more limited resources to make the cities feel alive. Skyrim’s cities aren’t perfect in this regard, but I think they end up fitting the game quite well, and they are certainly a big improvement over the cities in Oblivion.

Their biggest strength, and the thing that most sets them apart from Oblivion’s cities, is that they each have their own character and feel. In Oblivion, the only real difference between the cities was the style of the architecture; in Skyrim, the cities are not only visually distinct but also culturally distinct, something that is conveyed through the residents as well as through physical layout and design. Markarth, the City of Stone, is carved right into a mountain, on the site of some ancient dwarven ruins, and boasts one of the largest silver mines in Skyrim. The steep paths and carved steps of the city certainly look remarkable, but Markarth isn’t just for show; players will meet the laborers working the smelter, and will learn about the mafia-esque family that runs the whole town, using prisoners to mine the silver. Players can even poke their noses into the family’s business if they so choose. Riften, on the other side of Skyrim, has a completely different feel. A poor fishing town, built from rickety-looking wooden walkways around a central canal, Riften is plagued by crime. Even players who are not interested in joining the Thieves Guild will clearly feel its influence gripping the city, and opportunities for mischief and shady dealings abound for any interested parties. 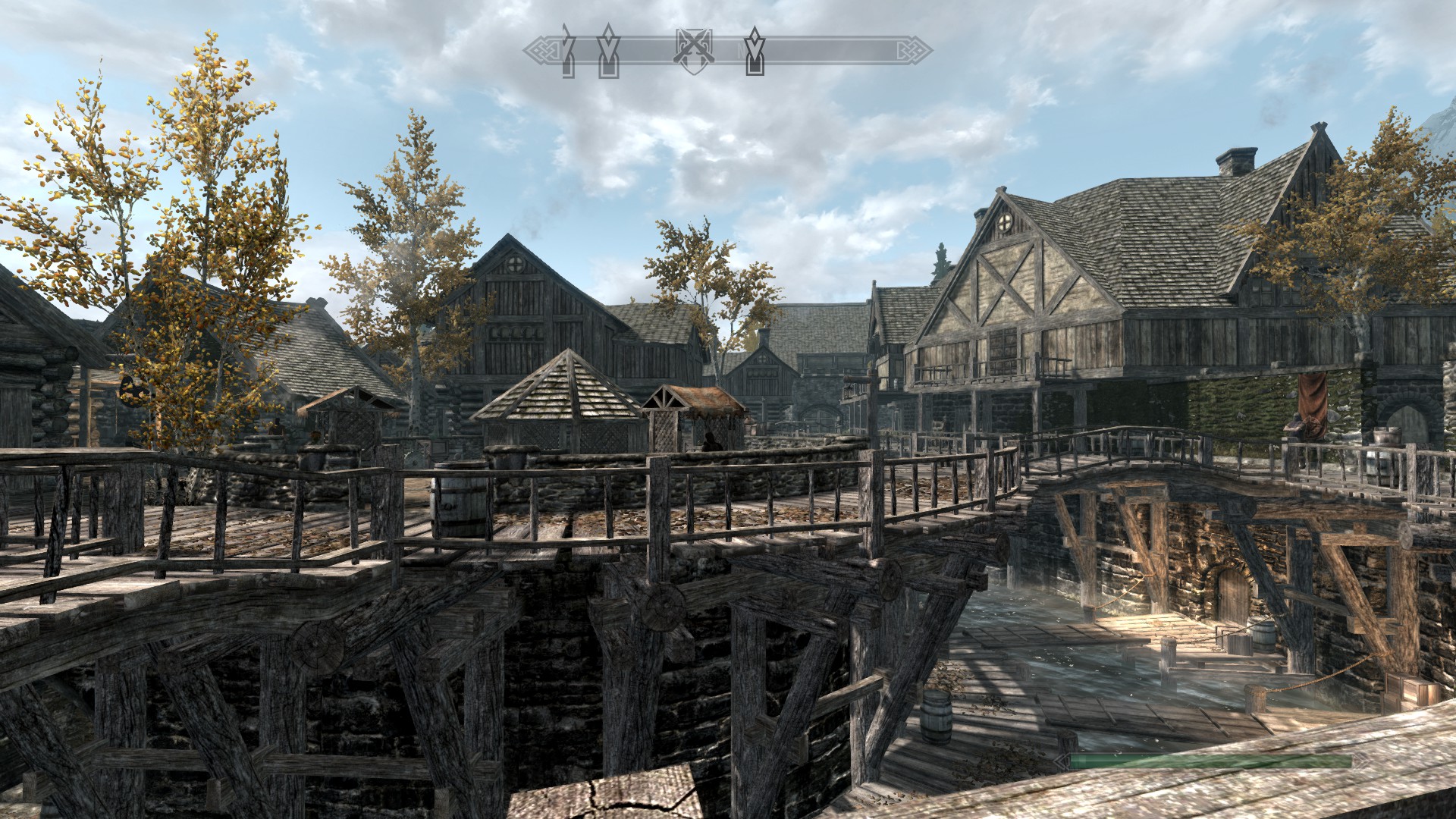 Great care has gone into making these cities fit in the game’s world, something that Morrowind fans will certainly appreciate, and it makes the cities far more entertaining and enjoyable to visit than the cities in most other games. Even if I am simply looking to sell off some loot or turn in a quest, I feel like I’m visiting a real place to do it. The problem that most players have, though, is that the cities are, well, tiny. There are maybe twenty residents in any given city, and each city is about as large as you’d expect for that number: a few streets, a few shops, a few residences, and the palace. That’s it. It’s immediately noticeable and honestly a bit distracting — these places look and act like cities, but contain just a handful of buildings and a few people. There’s no semblance of sprawl, or scale, or bustle. Nothing befitting the large urban centers these places are supposed to be.

So I was surprised at how quickly I stopped caring. Skyrim is a game that offers an entire country to wander around in, but it’s taken this place and shrunk it down to “fun size”. In a more realistic setting it would take most of a day to travel from one city to another, but in Skyrim we can run there in about ten minutes. In fact, this is probably why a full 24 hours of “Skyrim time” takes only an hour and twenty minutes of real time (a setting that I quickly changed). This is good! I wouldn’t want to spend hours of my precious gaming time just traveling from one place to another, not when there’s so many places to go in the game. It’s no different for the cities; in a real city I can spend all day wandering around, shopping and doing tourist activities and whatever else, and still have only covered a tiny portion of the place. And honestly, there are many parts of the city I’d probably never bother going to. Who wants to wander through a bunch of samey residential streets all day? Skyrim opts for “fun size” cities, where there are no uninteresting parts, and the whole thing can be taken in relatively quickly, at just about the right pace to match the rest of the game. The amount of time I spend in the cities versus wandering the countryside feels like the correct proportion, and even though the cities were obviously very small, I found I was able to suspend my disbelief and view them more as symbolic representations of the places they were supposed to be, rather than realistic ones. 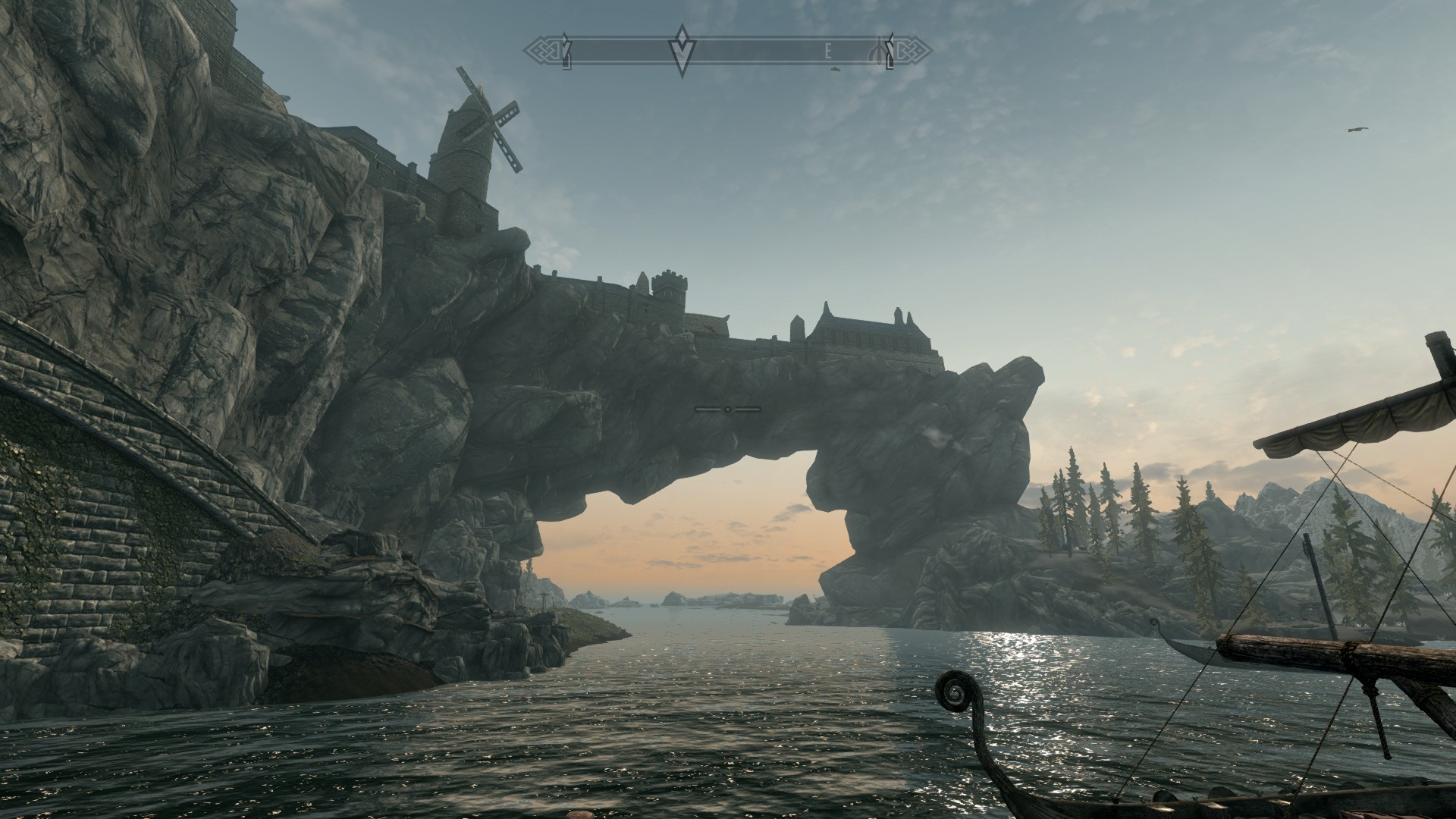 Daggerfall, the second game in the Elder Scrolls series (Skyrim is the fifth) took a different approach. It had huge cities, filled with houses and shops and other buildings, which really did lend a great sense of scale. But the problem was that these cities didn’t have anything unique about them, and it soon became apparent that they served no purpose other than trading and getting quests. When that’s all the city does, having it be really big just gets annoying; I had to laboriously ask townsfolk for directions in order to find shops, guild halls, and other interesting locations amidst the sea of identical-looking buildings, and once I had everything marked on my map, I would simply head to those locations on every visit, ignoring everything else. The thing is, for Daggerfall, these large cities were actually in keeping with the scale of the game. Daggerfall’s world, filled in largely through procedural generation, is one of the largest game worlds I’ve ever seen, with literally thousands of towns and cities scattered across its countryside. In such a place, a tiny city wouldn’t make sense; the problem was not so much that the cities were too big, but that the whole game was too big.

It makes some degree of sense, then, that Skyrim’s cities are so small, as it’s in keeping with the overall scale of the game world itself. And the cities make good use of their limited space. There may only be twenty or so people in a given city, but each one is interesting, often involved in one or more quests or at least offering some unique conversation. Nothing in Skyrim’s cities are filler, there are no buildings that the player cannot enter acting as background, there are no extra buildings added in simply to make things look bigger, and there are no generic townspeople with identical conversation options. Every building is unique, every person their own individual (even if the voice actors are reused rather frequently). But this comes at the cost of the illusion of scale, and in a few cases really does hurt the feel of certain cities. Windhelm, for example, is the main center of the Stormcloak rebellion, and is also home to a large number of dark elf refugees from Morrowind. The nords in Windhelm are a racist lot, so the dark elves are forced to live in their own slum, known as the Grey Quarter. But Windhelm isn’t large enough to really pull this off. The Grey Quarter is simply a street off to one side, hardly separate enough, or grungy enough, to really illustrate the dichotomy that the developers were surely going for. Other cities suffer as well; when reading an in-game book about Markarth, I discovered that the city (which is otherwise very well designed) was supposed to show the contrast between the poorer people working the mines and smelter and the richer people living farther up the mountain, but the city is so small that’s it’s hard to see these parts as separate from one another. 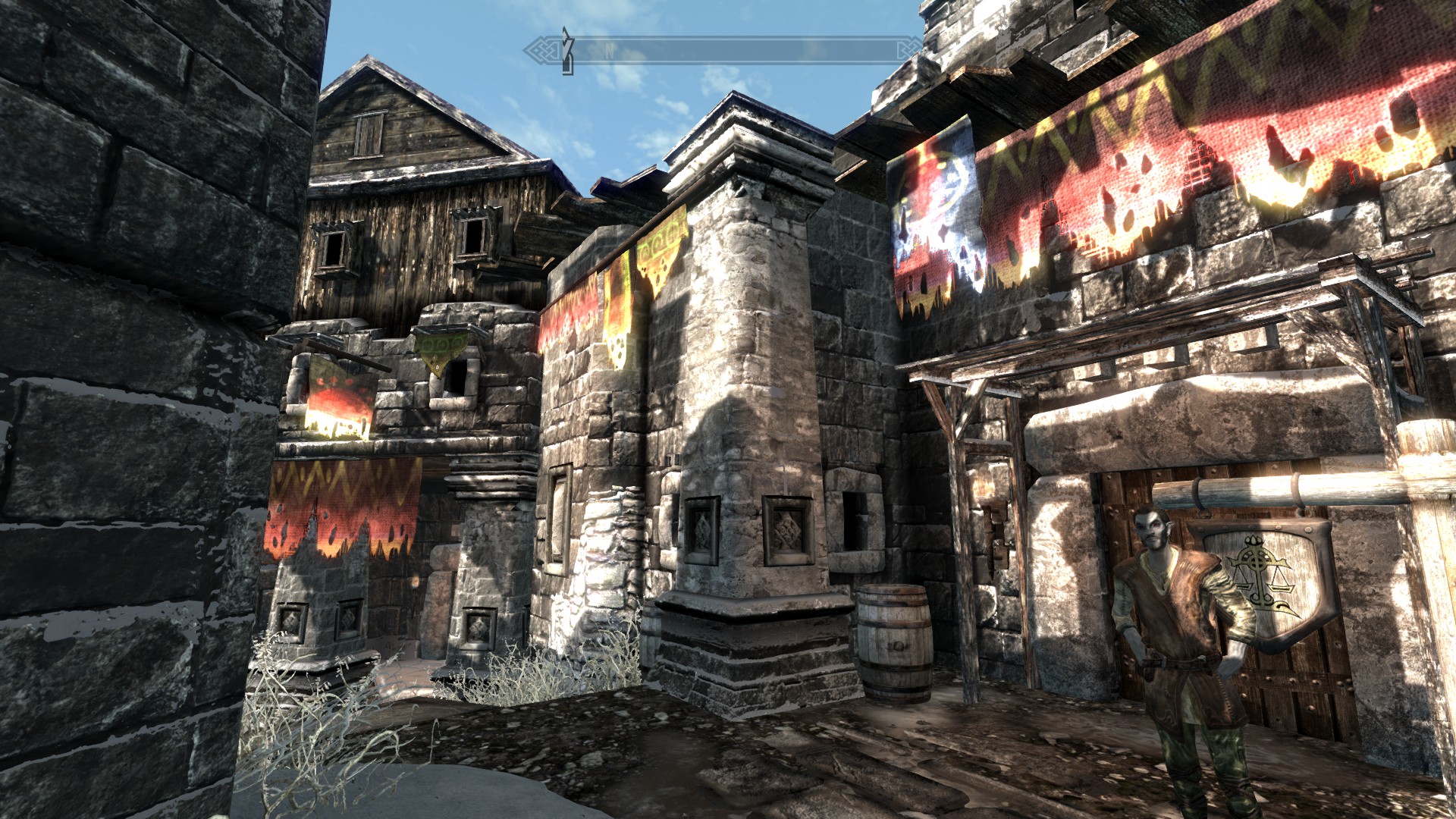 Overall, Skyrim’s cities could probably serve to be larger, even if only a little, just to give a better illusion of scale. But I think that erring on the small side suits the game better than erring on the large side, and I respect that the game steadfastly avoids simple filler that can’t be interacted with in any meaningful way. It means that, despite their size, I was able to have a lot of fun in Skyrim’s cities, and was more than willing to look past their shortcomings. They make the province of Skyrim feel like a cohesive whole, and therefore play to the game’s greatest strength: its offering of a rich and detailed world to lose ourselves in. Skyrim may not be as odd a setting as Morrowind, but it’s just as interesting a place to visit. If you haven’t yet, you should.