Scratching That Itch: Orison Of Mercury

This is the thirty-ninth entry in the Scratching That Itch series, wherein I randomly select and write about one of the 1741 games and game-related things included in the itch.io Bundle for Racial Justice and Equality. The Bundle raised $8,149,829.66 split evenly between the NAACP Legal Defense and Education Fund and Community Bail Fund, but don’t worry if you missed it. There are plenty of ways you can help support the vital cause of racial justice; try here for a start. Lastly, as always, you may click on images to view larger versions.

What will the random number generators select this time, from the itch.io Bundle for Racial Justice and Equality? It’s Orison of Mercury, by .. Yes, the developer is, apparently, known as “.”, although the game page says that Orison of Mercury was made jointly with Mint for the Antholojam. Its tagline in the bundle reads:

The lonely work of finding a new home.

I am intrigued. It sounds like it’s aiming for a meditative, affecting experience.

Orison of Mercury casts players as the pilot of the Traveler mission, sent into deep space to find new habitable planets for humanity. It is a one-way trip. The mission brief states that new habitable worlds are imperative for survival, but whatever calamity has struck is not discussed. Everything is presented in a stark, gold and black retrofuturist interface, as players navigate their ship to different sectors, scan planets to find those with suitable atmospheres, and even launch probes to explore the surface of promising planets. 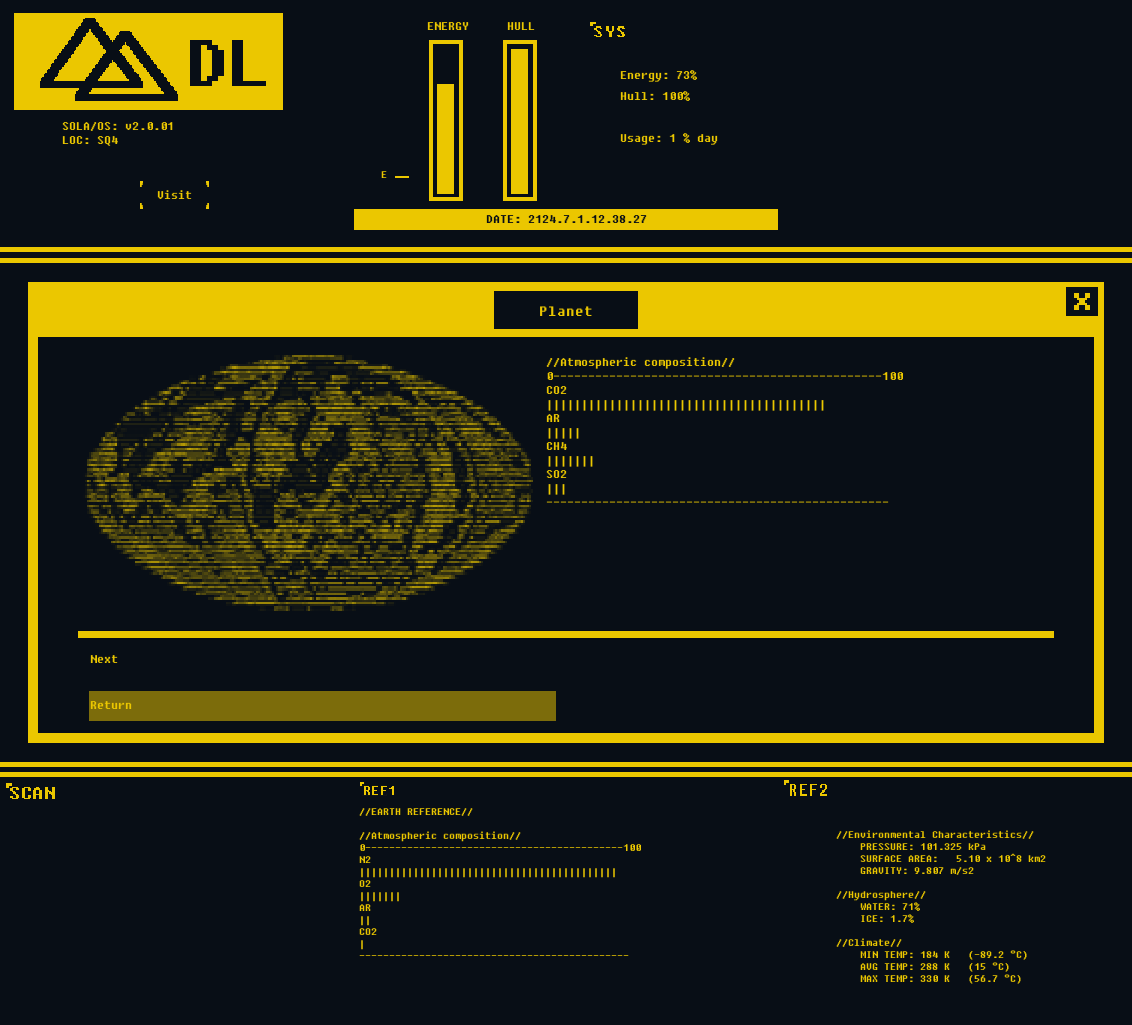 It is indeed lonely work. The pilot’s only company is the computer system in the ship, which will occasionally interject with a psychological assessment quiz, or a suggestion to enjoy some rare peace and quiet while traveling between star systems. It’s not much comfort, during the long days of space travel. The days aren’t that long for the player, though, flying by as they navigate to new stars and investigate their planets. But Orison of Mercury still manages to capture that lonesome feeling, as players search through planet after planet, trying to find one with a breathable atmosphere, reasonable temperature range, and lack of hostile life. Deep space is eerily silent, but solar systems are accompanied by simple yet effective ambient electronic music that sets the mood. I was reminded of the tone of Out There, which is good company to be in.

But actually controlling things in Orison of Mercury is unlike Out There. If I were being reductive, I’d describe it as a mix between Out There and The Wager, which is not a very useful comparison since I don’t think many people played The Wager. Orison of Mercury shares that game’s top-down procedurally generated map to explore, here showing the stark blackness of space with occasional highlighted grids near stars, some of which contain planets. Double-clicking on a space sends the ship there, at the cost of some of the energy reserves, and once a planet is found players must scan it in several stages. First is the atmospheric scan, to see if the mixtures of gases are breathable. Most are not. But it’s worth scanning for artificial signals too, just in case. Aliens may not breathe the same air as humans, after all. Finally, players may send a probe down to the surface to investigate.

This, remarkably, leads to full 3D first-person exploration segments, complete with mouselook controls, letting players wander around the landing site. The surroundings are still rendered in the gold and black style, using dithering to add shading to the landscape, which makes for wonderfully evocative vistas despite the primitive graphics. There’s only a short time to explore before the probe runs out of power, but these surface jaunts were so cool that I sometimes landed on uninhabitable planets just to see what they looked like.

Landing probes costs energy, however, as does nearly every other action. So there’s some incentive to be efficient during one’s travels. I soon learned that the resource management isn’t nearly as tight as it is in Out There, since running out of energy just prompts the player to enter cryosleep for a while so the ship can use solar energy to recharge. This is confusing at first, but I eventually learned that trying to fly somewhere without enough energy to reach it will prompt the cryosleep message, so if players simply keep pressing on they should be able to make extended explorations. Some random events out in deep space can recharge energy as well. The ship’s hull, however, is a more finite resource, slowly draining away during the mission. There’s enough that players will likely be able to explore everywhere they wish to, but expeditions are not indefinite. Of course, it’s easy to start a new game with new randomized space to explore too.

I was eventually able to find some planets suitable for colonization, and was pleased to see their ultimate fates explained once my mission was over. I think there are only a few planets in the game that can be successfully colonized, as I found some of the same ones after starting again, but I liked how they were not just generic worlds. Each successful colony has a story, some with bright futures, others less so. I suspect there might be at least one more of these that I didn’t find, and I might play again to track it down if I can.

I really liked this one. There are a few annoyances: it launches in a window but does not react well to re-sizing, stretching UI elements instead of scaling them. The text was pretty small on my 1440p monitor. There was some occasional buggy behavior too, with the game losing the mouse cursor (fixed by task switching away and back) or clickable interface elements no longer responding. But its stylish presentation looks great, it nails the tone, and it’s playable in short, repeatable sessions. If the prospect of exploring space in an old-fashioned spaceship sounds appealing, Orison of Mercury is definitely worth a look. If you missed it in the bundle, it’s sold for a minimum price of $4, including versions for Windows, Mac, and Linux, as well as the original jam web build.

Scratching That Itch: In Another Life