Out There Is Pretty Far Out 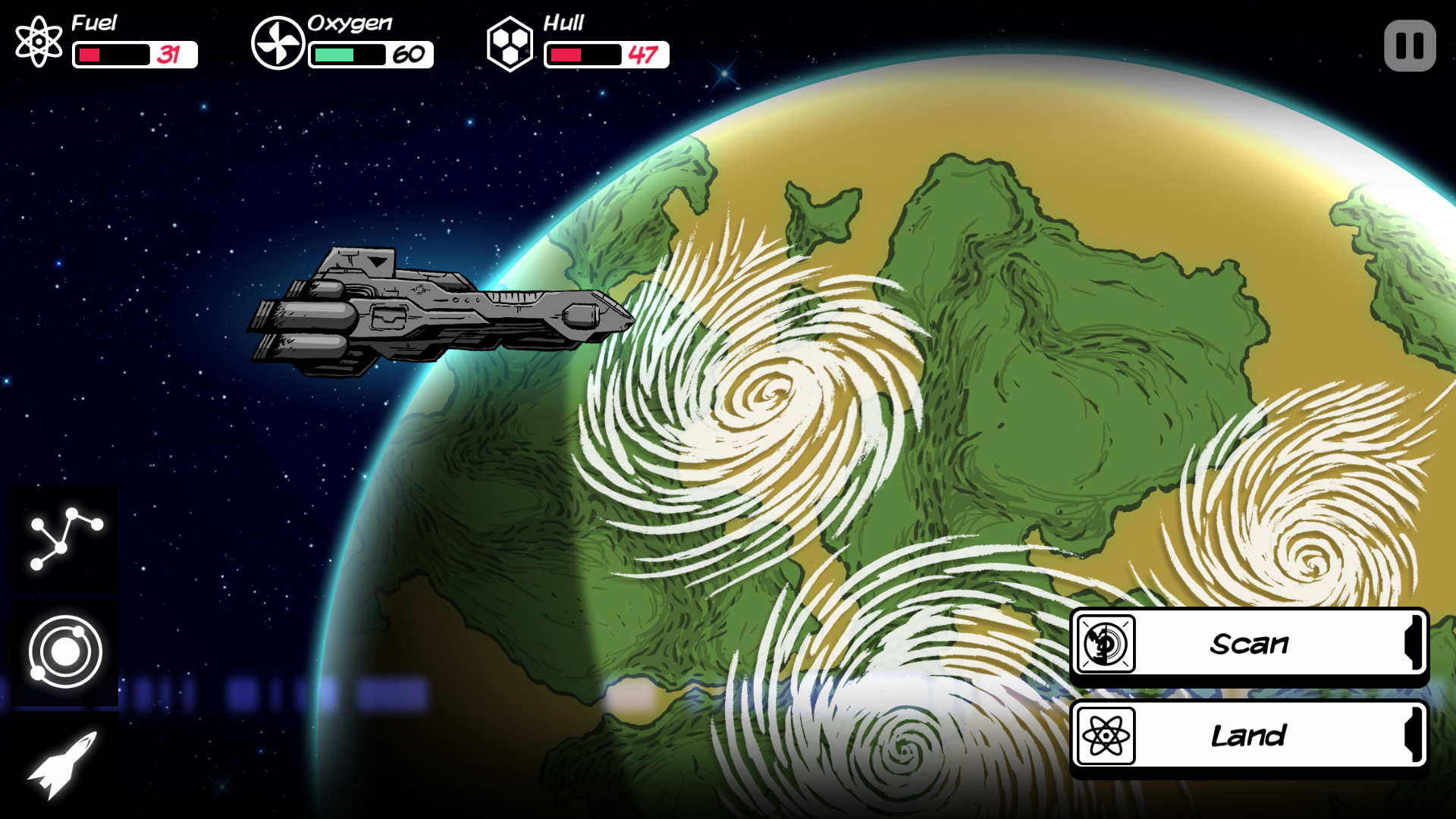 As always, you can click on images to see larger versions.

I’ve said before that it was never my intention to write exclusively about PC games on this blog, it just sort of happened that way since that’s what I spend most of my time playing. But I rectified that with my first post about a mobile game (albeit also available on PC), Super Hexagon. Now I’m going to literally double my posts about mobile games by writing about another game that’s kept me entertained on my phone: Out There. It’s even (almost) timely, given that the new, fancier Ω Edition of Out There recently entered open beta for Windows, Mac and Linux, with a full release planned for this spring. This timeliness is purely accidental, I assure you, as I played the original version on my phone many months ago and simply never got around to writing about it until now. But I am very happy to hear that my mobile version of the game will be updated to the Ω Edition for free once it’s released. Hooray!

Out There is a perfect example of the great things that can happen when new games build on ideas from older games. Out There is obviously inspired by FTL, borrowing that game’s premise of a randomized space adventure that will almost certainly end in death, at which point the player must start over again with a new adventure, and slowly learn how to survive a little longer. FTL was one of the frontrunners in the trend of roguelike-likes (now also called roguelites), which borrow design elements like perma-death and procedural generation from traditional roguelikes and apply them to other game genres and styles. Given their prevalence now, one could argue that many games take inspiration from FTL, but in the case of Out There it’s particularly overt. The star map, the random events described in text boxes, and even the titular FTL-jumping (renamed as space folding) are more or less directly lifted from FTL. But despite these similarities, Out There feels very different to play, due primarily to its tone and pacing.

FTL, despite having pausable combat and turn-based events, is a very fast-paced game. The player is on the run, always only a few jumps ahead of the pursuing fleet, and nearly every jump leads to a fight or other dangerous situation. Combat is frequent, and managing crew and ship systems during these battles makes up the bulk of the play time. Out There, in contrast, is devoid of combat. Instead of a grand science fiction romp through areas of space full of aliens, pirates, slavers, and settlements, Out There is the story of a lone astronaut, hopelessly lost after millenia adrift in stasis, trying to find his way home. While there are aliens to meet, most of the journey is a lonely one, and Out There absolutely nails the feeling of being alone in space. The sound design is a big part of its success in this regard; the low hum of the ship engines is often the only accompaniment on the journey, apart from the minimalist music. There are also the log entries the protagonist makes after each jump, which sometimes describe important things like system malfunctions but more often detail his extreme boredom as he spends months traveling through space. He comes up with overly complicated games to play in zero gravity, or waxes philosophical about the nature of the universe, or documents the changes his body has undergone from prolonged exposure to stellar radiation.

It’s a very different take on FTL’s formula. Without combat, Out There’s challenges are instead related to resource management. Players must watch their fuel, oxygen and hull integrity (reduced by environmental factors, not by enemy gunfire), and gauge when they can replenish them by extracting resources from the different planets encountered in each star system. To make it farther than the first few star systems, players will also need to upgrade their ship with new equipment, constructed from raw materials obtained during exploration. As I am — technically — a chemist, I was pleased to see that the raw materials are organized by chemical element. Hydrogen and helium are used for fuel, iron can be used to patch the hull, and more exotic elements like thorium and tungsten are used when crafting crazy new technology. Of course, these devices and supplies all take up space on the ship, so players must also choose which things are most important to take with them. 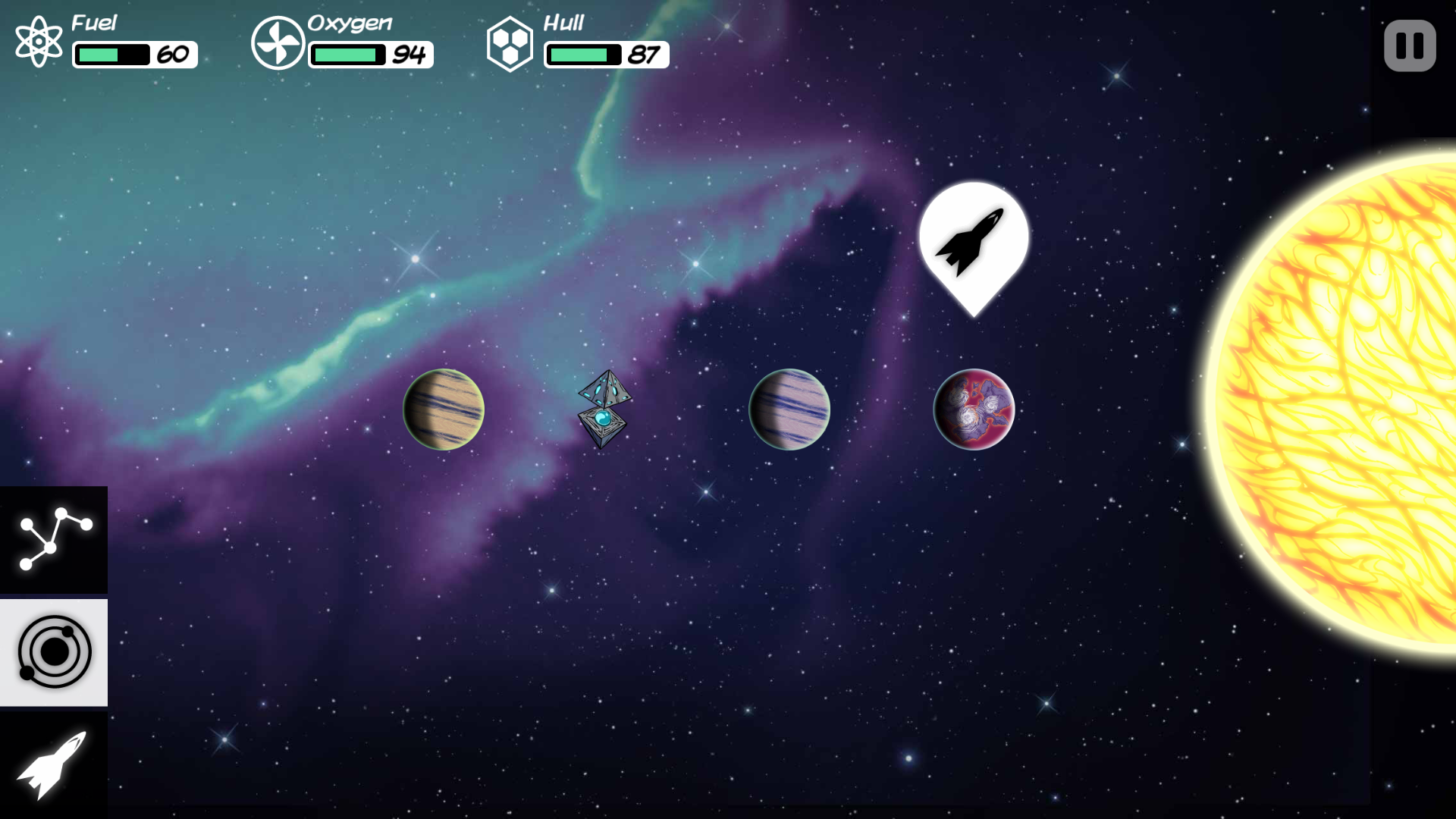 At first, all this is confusing. A typical star system has several planets of different types, each of which can be explored and mined for resources, and I felt overwhelmed at the beginning when I didn’t know how anything worked. And, given the random nature of the game, this meant my poor astronaut was soon out of oxygen, or cast adrift in deep space. Like FTL, most journeys in Out There end in death, and these deaths can seem capricious and unfair when one hasn’t figured out how to survive yet. But after several attempts, I started to learn how everything works. Each planet type can provide certain resources, but accessing these will entail costs elsewhere. The ship’s stats — power, ecosystem and resistance — simply affect how quickly the main resources of fuel, oxygen and hull integrity are depleted. So the game becomes a balancing act of finding the right resources at the right times and boosting the ship’s stats to make those resources last longer.

Further complexity is introduced as one travels farther, with alien races to meet and some mysteries to unravel, but I don’t want to spoil these. Suffice it to say that while the early journeys may feel punishingly random, the more one learns about the systems and possibilities in the game the more reliably one will be able to survive, and the focus will shift towards learning and building fancy new devices and effectively managing the more exotic resources in the game. After many plays I was regularly getting close to one of the three possible endings, having learned how to tip the odds in my favor. The random element is always there, of course, but I was better able to survive in the face of bad luck. 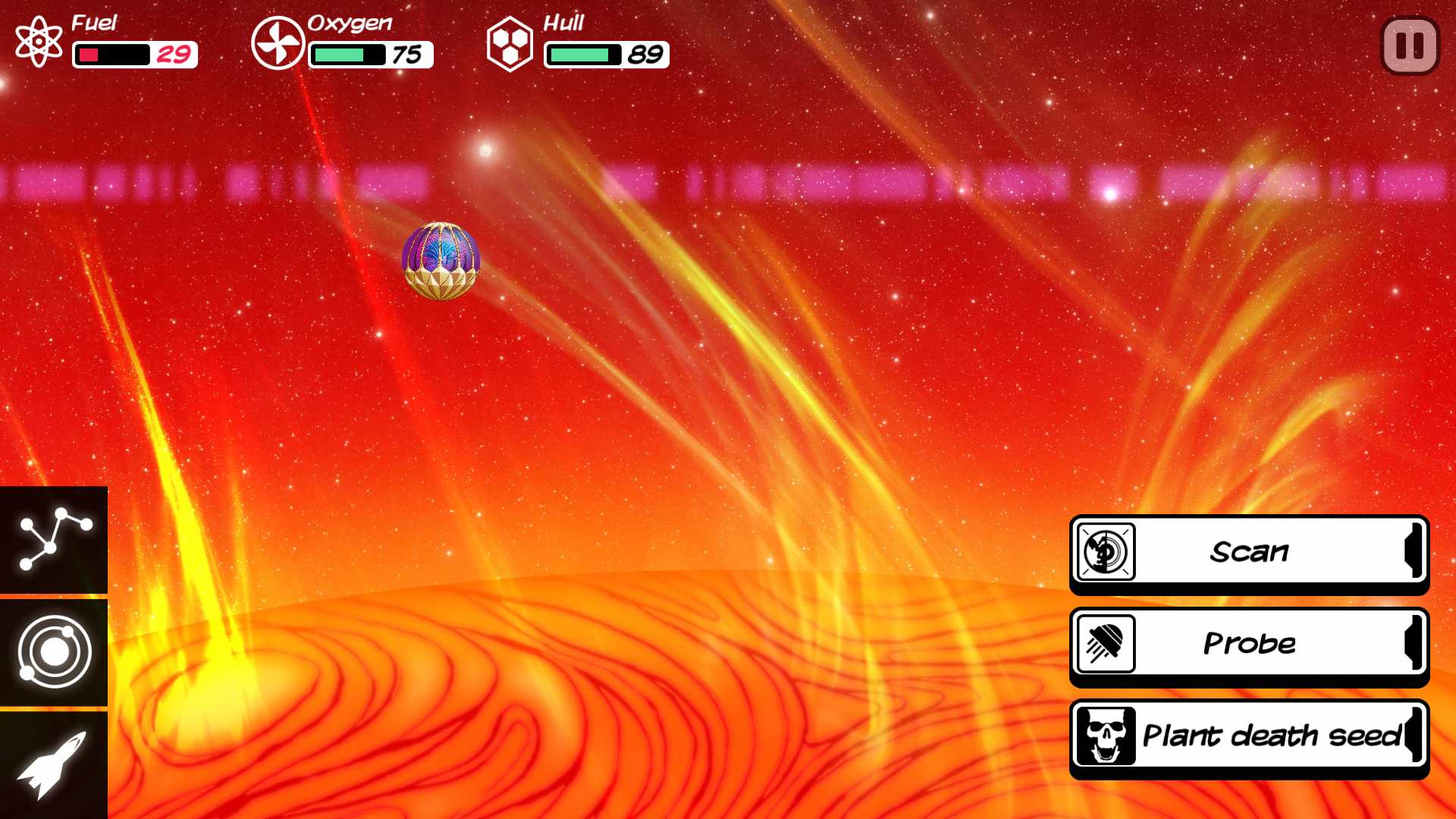 Unfortunately, there’s not much incentive to continue once one has found the three endings. But I got more than enough entertainment from my adventures through space to leave me satisfied. Out There feels smaller than FTL, but that’s actually a good fit for a mobile game, which I will often play in short spurts rather than long sessions. In fact, everything about the game is a good fit for a mobile device: a clean, crisp interface that’s easy to navigate on a small screen, a turn-based design so it’s always safe to look up from the screen to deal with the real world, and the ability to save and quit at (almost) any time, so there’s no harm in only playing for a minute or two. Plus, the upcoming Ω Edition, which will arrive as a free upgrade for the mobile versions of the original game, promises a slew of new content that will provide plenty of reasons to return. There will be a brand new ending to find, along with a slew of new interactive events, new aliens, new ships, upgraded graphics and an extended soundtrack. I’m excited to try it out when it’s released.

The Ω Edition will be cross-platform on Windows, Mac and Linux in addition to mobile devices, but until then, the original Out There is restricted to iOS and Android. Whether you decide to wait for the new version or dive in now, I’m sure you’ll enjoy getting lost in space.

Returning To The Witcher 2