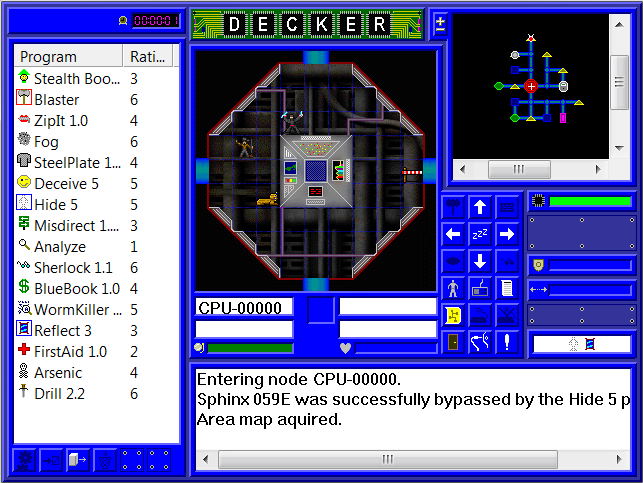 There are some who consider Decker to be a true roguelike, but I found it played so differently to traditional roguelikes that I hesitate to call it one, exactly. But it certainly draws inspiration from roguelikes, and the end result is quite interesting.

You see, Decker is a game about hacking. Not hacking and slashing, as most roguelikes are, but hacking as in breaking into computer systems and stealing files. Drawing heavy inspiration from William Gibson’s Neuromancer, it casts the player as the titular Decker, a 22nd century hacker who is contracted to cruise through the virtual reality of the Matrix and steal valuable data. It lets you lead a dangerous but alluring life of corporate espionage and high-tech gadgetry. Well, eventually. In the beginning you are living in poverty, have a bare-bones cyberdeck (read: futuristic computer used for hacking purposes), and can only get a job breaking into the local Radioshack computer system to reset someone’s sick days, or something. A smart Decker doesn’t ask for the details. As you gain cash and a reputation, however, more meaty jobs start to appear, and you can upgrade your hardware and software to tackle some higher-security systems. This is the first and most obvious way that Decker differs from traditional roguelikes: rather than exploring a single dungeon or world, the player will tackle many different procedurally-generated computer systems, connected by an overarching time management game that lets one divide time between writing new programs, resting to recover from injury (yes, you can be physically injured when you’re jacked into cyberspace), or completing contracts in order to make rent at the end of the month.