Scratching That Itch: Detective Hank And The Golden Sneeze 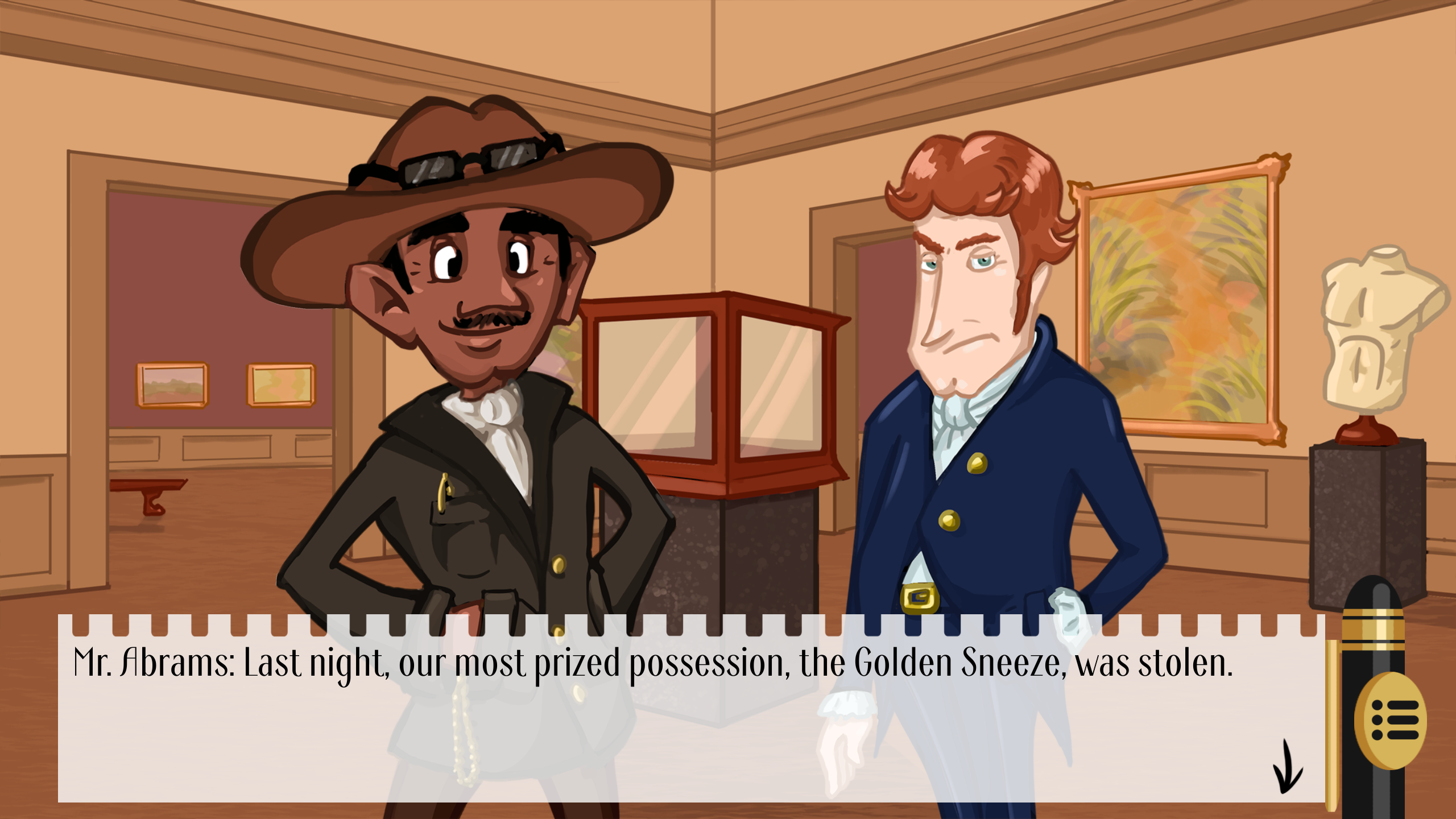 This is the sixty-second entry in the Scratching That Itch series, wherein I randomly select and write about one of the 1741 games and game-related things included in the itch.io Bundle for Racial Justice and Equality. The Bundle raised $8,149,829.66 split evenly between the NAACP Legal Defense and Education Fund and Community Bail Fund, but don’t worry if you missed it. There are plenty of ways you can help support the vital cause of racial justice; try here for a start. Lastly, as always, you may click on images to view larger versions.

The virtual dice have been rolled once again, making a random selection from the itch.io Bundle for Racial Justice and Equality. It’s Detective Hank and the Golden Sneeze, by Obsessive Science Games. Its tagline in the bundle reads:

An interactive whodunnit with a different culprit on each playthrough!

Detective Hank and the Golden Sneeze is a visual novel, the second to appear in Scratching That Itch, after Conversations With My Anxiety. As a visual novel, it mostly consists of reading bits of dialogue, accompanied by a colorful backdrop and character portraits that cycle through different expressions as appropriate. Players follow the titular Detective Hank as he investigates the theft of the valuable Golden Sneeze from the local museum, and must choose from various dialogue options when talking to witnesses or suspects, and decide which leads are the most important to follow. Over the game’s five chapters, Detective Hank will hopefully amass enough evidence to identify the thief and prove them guilty in court. 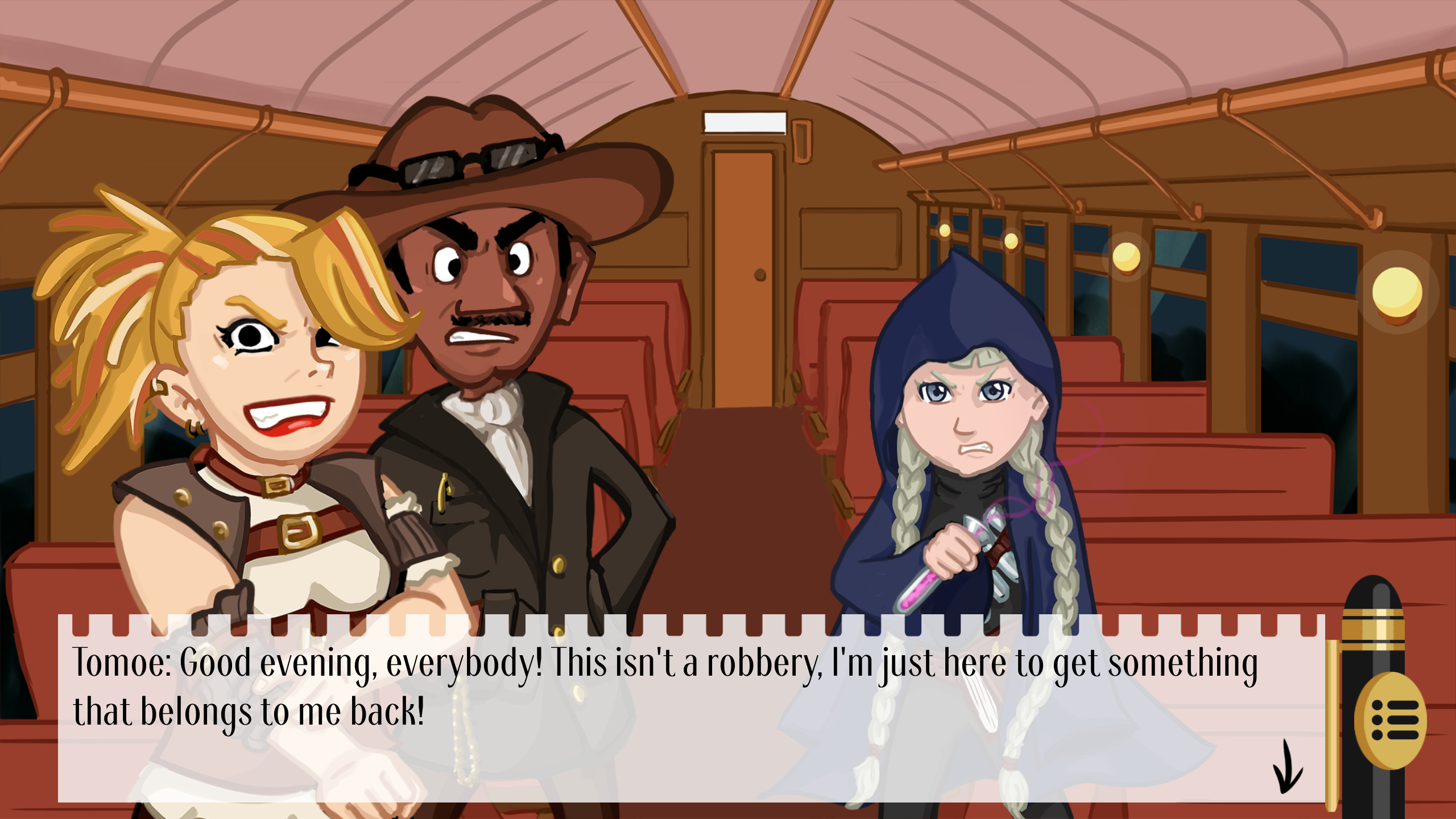 But that is only part of the story. Or rather, one of the stories. There are actually four stories included, each a slight deviation of the same case, and each with a different culprit. Players may choose which of these to play, or select one at random. Naturally, I tried all four, as my way of thoroughly investigating the game. The construction of these alternate stories is clever: certain clues can implicate more than one suspect, so Detective Hank must be careful to gather all the evidence lest he accuse the wrong person. I was pleased to find I’d nabbed the correct person each time, although in one case my evidence was incomplete. Luckily the judge still deemed it sufficient for a conviction.

I like the setting of the game. Initially seeming no different from our world, as the story progresses some steampunk inspirations are casually revealed. Detective Hank’s fathers in law work at a robot factory, and Hank complains about having to refill the water in his oversized portable telephone too often. I love that these elements are treated as commonplace, unworthy of special attention. They’re just some steam powered robots, what’s the big deal? It’s totally normal for Hank and everyone else in the story, so it’s presented to players as such. The same is true of the diverse cast, which is never commented upon at all. Everyone simply lives and works together without any problems, which is lovely to see. 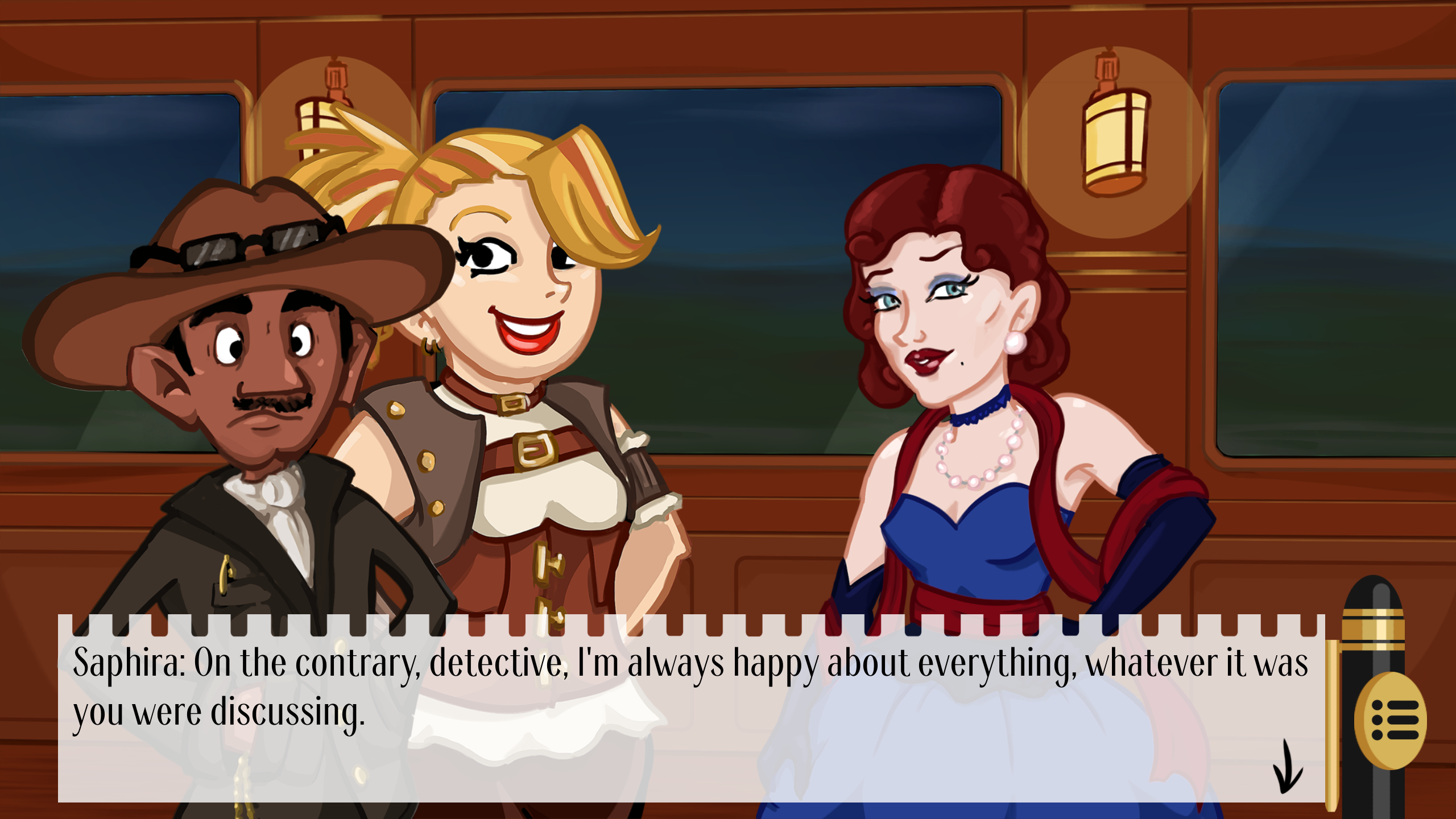 The lighthearted and upbeat tone is also great. There’s no trace of the grim, dark subjects that are often found in detective fiction. Detective Hank loves his job, he and his wife Mary love and support each other, and even the crime itself never seems that serious. In fact, some culprits confess and seek atonement of their own accord, once uncovered. Most of the possible endings are happy ones, and everyone seems to have a good time as they help each other crack the case. The writing never made me laugh, but it’s fun and full of banter between the different characters. There are a few awkward lines, which made me wonder if the developers may not speak English as their first language (my amateur internet sleuthing suggests they are Dutch), but these were easy to overlook. The beautiful character portraits help too. Mary’s signature grin, for example, expertly conveys how she would deliver her lines.

A given storyline is short, easily played through in a single sitting, although the game automatically saves at each chapter break if players wish to resume later. There’s also the option to skip forward to the next choice, which is nice when replaying a story or proceeding through a section that is identical in each version. In addition to the four main storylines, there’s a bonus mini-story that lets players explore an event alluded to during the main game. This is a much shorter, single-chapter affair, but it tasks Detective Hank with his toughest case yet: the mystery of who stole his cookie. I’m actually not joking, this felt tougher than the main storylines, forcing me to deduce the culprit based on limited evidence and make a few inspired guesses in order to nab the nefarious thief. This was a lot of fun, and a great opportunity to spend more time with Detective Hank’s family. And, true to form, there are three versions of this miniature episode as well, with a different thief for each. 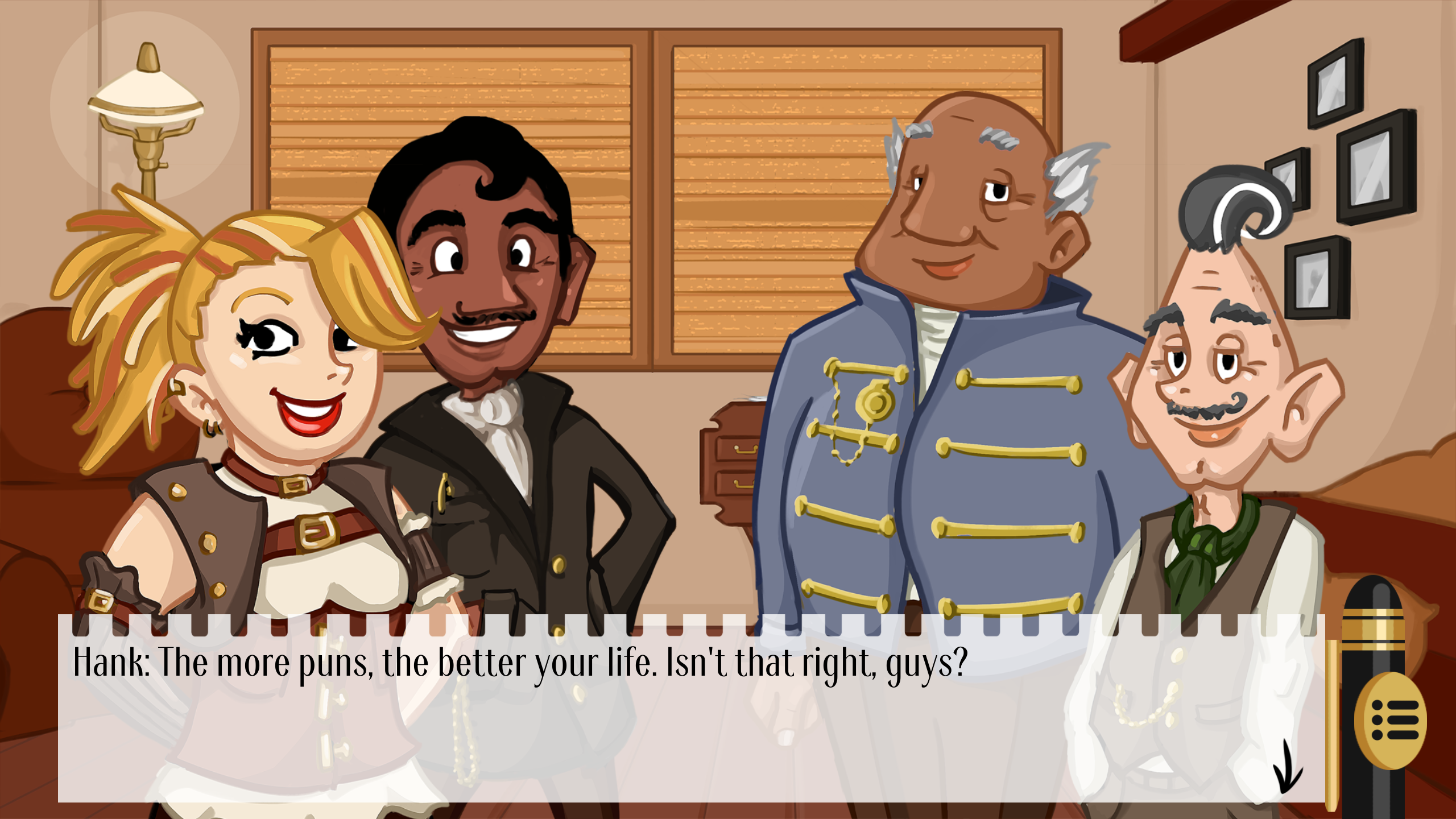 On Obsessive Science Games’ webpage, they describe Detective Hank and the Golden Sneeze as “the happiest steampunk video game available” and I’m in no position to argue. Anyone fancying an upbeat mystery could easily do worse than this. If you missed it in the bundle, Detective Hank and the Golden Sneeze is sold for a minimum price of $4.99, including versions for Windows, Mac and Linux.

Detective Hank and the Golden SneezeObsessive Science GamesScratching That Itch

History Lessons: The Magic of Scheherazade

Scratching That Itch: Escort Yourself Out