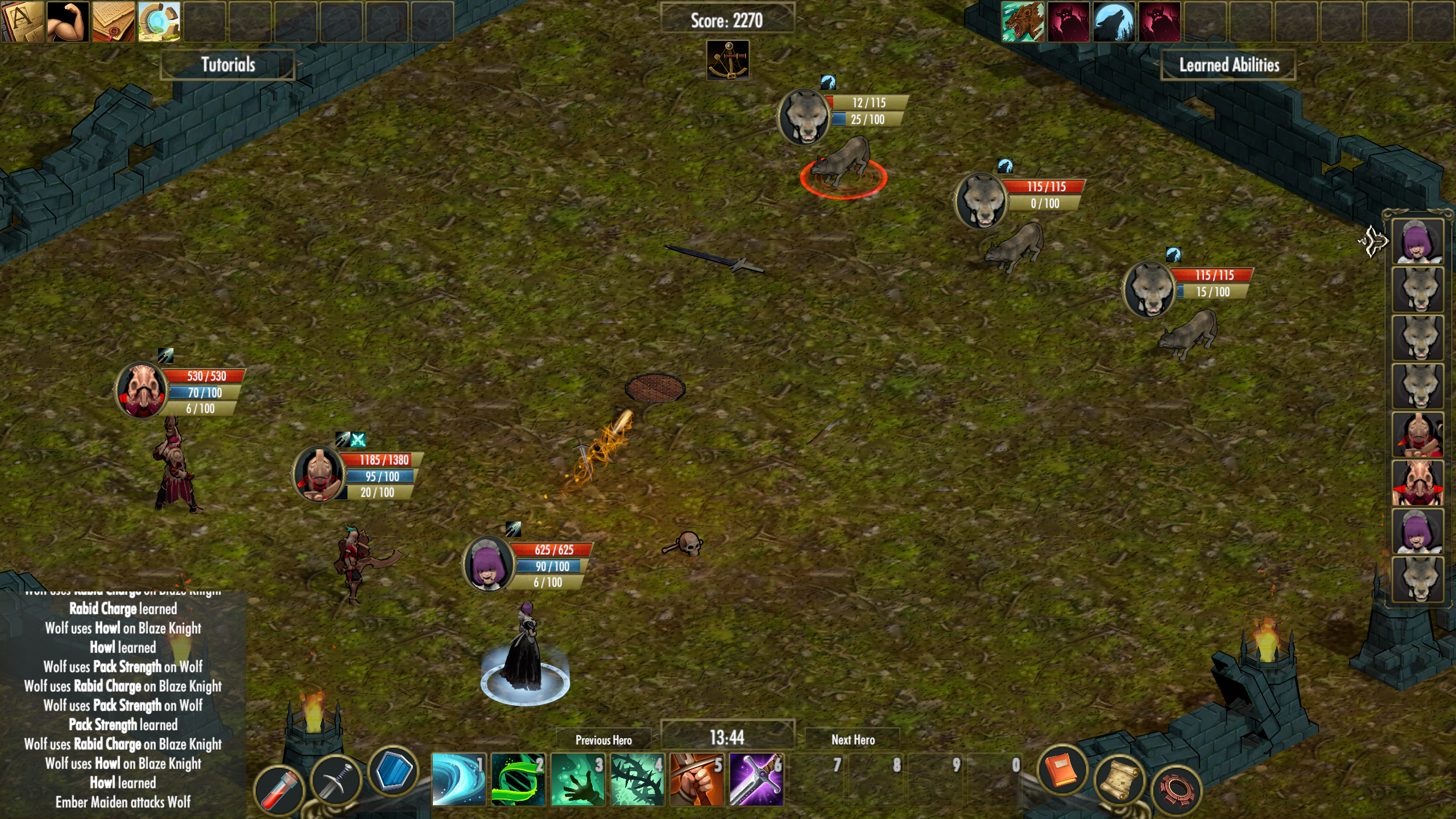 This is the twenty-seventh entry in the Scratching That Itch series, wherein I randomly select and write about one of the 1741 games and game-related things included in the itch.io Bundle for Racial Justice and Equality. The Bundle raised $8,149,829.66 split evenly between the NAACP Legal Defense and Education Fund and Community Bail Fund, but don’t worry if you missed it. There are plenty of ways you can help support the vital cause of racial justice; try here for a start. Lastly, as always, you may click on images to view larger versions.

The random number generators have whirred to life once again, pulling another selection from the itch.io Bundle for Racial Justice and Equality. This time it’s Emberlight, by Quarter Onion Games. Its tagline in the bundle reads:

The character limit means we may never know what the Gods have given. My guess is they haven’t given very much.

Emberlight is very close to something I would like. It’s a turn-based fantasy game about exploring dungeons with a party of adventurers and cleansing them of evil. In lieu of finding new weapons and armor to equip, the party learns abilities from their enemies, which can be equipped for passive stat boosts as well as for their active ability during battle. The battles themselves are reminiscent of Japanese-style role-playing games, with the player’s three-character party lined up on one side of the screen and the enemies lined up on the other, as they take turns battering each other. But the mechanics of those battles are a bit unusual. 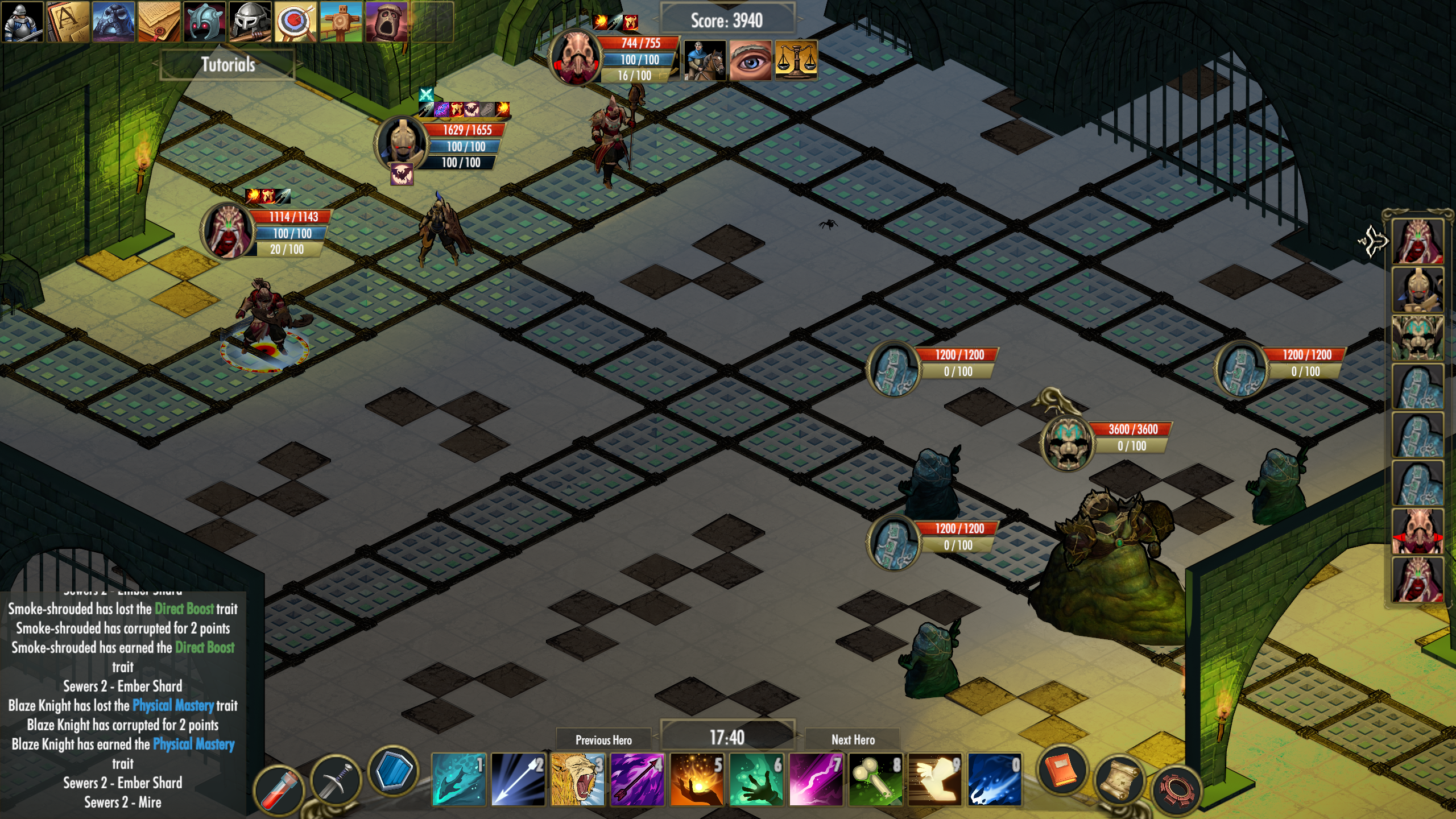 Before I get into that, I should explain that Emberlight is designed to be played in relatively short, discrete runs, each started fresh. Players build up their party over the course of a single dungeon crawl, but they will not persist beyond that. Or rather, they will, in an abstract way. Emberlight’s main schtick is that equipping abilities learned from enemies corrupts your characters, and after a successful run, the most corrupted hero will turn on the others, and become the villain in a future run. Players therefore must face off against their own creation. I never got to do that, sadly, because there are simply too many hoops to jump through first.

Currently, new players only have a few choices of types of runs to try. There’s a menu option for “story mode”, but it’s greyed out, with no indication of how to enable it. Is it planned for a future update? Is it unlocked after playing individual runs enough times? That’s not clear. What is clear is that in order to face off against a former party member who succumbed to corruption, players must play a few runs and “level up” first. I was forced to try a few standard runs with known bosses to kill instead, and I didn’t get that far with them. 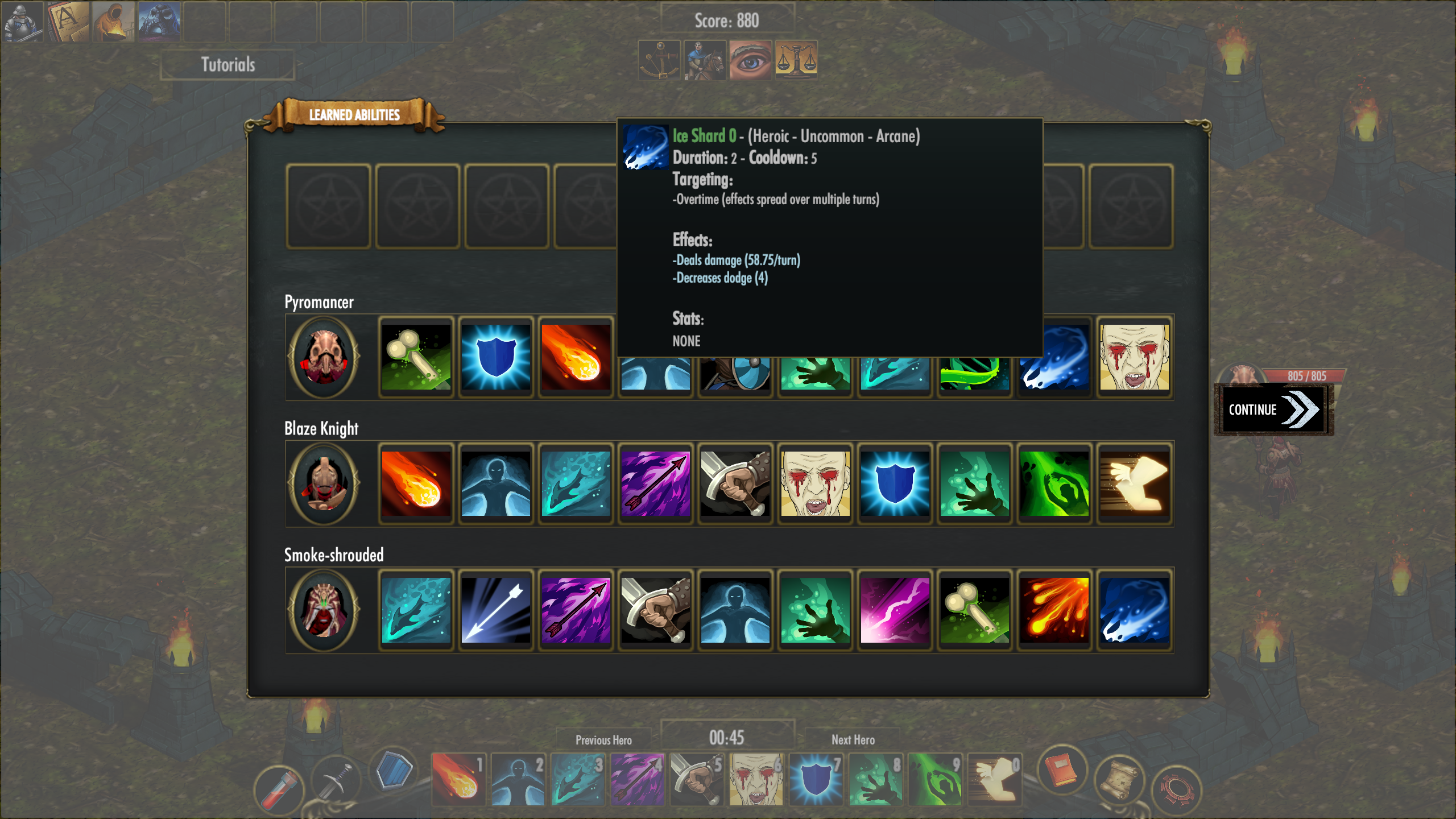 One big problem with Emberlight is that it doesn’t explain itself well. I learned more about the central concepts — learning and equipping abilities and the corruption this causes — from reading the itch.io page for the game than I did from the game’s own tutorials. These hardly qualify as tutorials anyway. There’s no playable scenario to teach the rules, instead there are some tutorial icons in the top left of the screen, which provide tooltips when the mouse cursor is moved over them. New tutorial icons appear contextually, when encountering new things, so at first I was completely unable to read about how combat worked. I had to actually get in a fight first. Worse, only ten tutorial icons appear at any given time, and to see the new ones players must click on old ones to clear them away forever. If there happens to be an exit leading to another room in the top left corner of the screen, then clicking a tutorial icon will instead send the party to the next room, effectively making it impossible to view new tutorials before accidentally sending the party headlong into battle.

There’s nothing wrong with having text descriptions of how a game works. That’s how all games used to do it, back when game manuals were essential reading. But if you’re going to do that, you should let players read it all, at any time. The limited number of one-time-only tutorial icons here is a terrible system. Still, it wasn’t too hard to figure out the basics with a little trial and error. Dungeons are shown in an isometric perspective and are made up of one-screen rooms. The party navigates these one room at a time, and can see what each room contains on the map. Some rooms might have money and potions, or a shrine to provide a buff, or a campfire to heal the party, or some special themed encounter. Many contain standard battles, which is where the heart of the game lies.

Fighting successfully in Emberlight requires doing a lot of math. Each character can equip up to ten abilities, all of which run on cooldowns, and tend to have a complicated mixture of buffs, debuffs, and damage. Central to it all is “potency”, which measures a character’s strength. Generally, all damage-dealing abilities are expressed as multipliers of a character’s potency (e.g. “deal 1.67*POT to a single target”). Then there are different types of abilities, and loading up on a bunch of the same type will make them all more effective. For example, having at least five Physical abilities equipped will grant Physical Mastery, which provides a 5x potency multiplier to all Physical abilities that character uses. As characters gain more corruption, they may earn new permanent traits which affect potency for different abilities as well.

None of this made sense for my first run. And it didn’t need to, because it was absurdly easy. The difficulty scaling in Emberlight is bizarre, with the first floor of a dungeon (which is always the same environment with similar enemy types) being trivial to complete. The first time I tried a multi-floor dungeon, I defeated the boss of the first floor with a single attack, and I still don’t know exactly why. The stacks of buffs, traits, and debuffs make it really unclear how much damage an ability will do, and other interface quirks — like having to select a target before selecting an ability to use, or the cooldown timers that are really hard to read — just make it harder to determine what is going on. Having bested that boss, however, I descended to the second floor of the dungeon and traipsed through a bunch of non-combat rooms, the last of which was a trapped treasure chest. Having found one of those on the first floor also, I opened it, knowing the trap wouldn’t be too bad.

Except, it was. It took out about about half of my party’s health, and applied a nasty persistent damage effect on top of that. I recalled that there had been a tutorial icon about using abilities outside of battle, but I’d cleared it away to make room for more tutorials and had no way to recover it. I tried using a healing ability on one of my characters but nothing happened. Then I thought I’d use some of the potions I’d been collecting to heal up, but the potion icon is located in the bottom left corner of the screen, and there was a door to another room in that direction too. So, when I clicked the potion, instead of using the potion it sent me into the next room, where enemies were waiting. It was a pack of slimes, each with nearly ten times more health than anything I’d encountered on the floor above, who instantly stunlocked my party and took them down to the brink of death. I actually managed to survive that battle, but lost one of my soldiers, and the rest died soon afterwards.

At this point, I wasn’t particularly inclined to continue. The exploration aspect of the game hadn’t excited me, and the detailed mathematical formulas needed to figure out effective combat strategies were more chore than fun. But I decided to try the challenge mode once before calling it quits. This is a daily challenge, similar to those offered in many other procedurally generated games, in which all players encounter the same world seed and can compete for high scores. There are a bunch of special rules applied to make each daily challenge run distinct from a standard run. In this case, all characters began with ten random abilities instead of their standard starting set of four, and they couldn’t learn abilities from enemies. Instead, rooms containing single new abilities to find were much more common, and the corruption gained form equipping them was significantly increased.

It was only in this run that I started to understand how everything is supposed to work. The added corruption let me see how characters transform after equipping many abilities. My heroes gained traits like Corruption Vampire or Corruption Warlord, granting them affinities for certain types of abilities as well as specific strengths and weaknesses in terms of their statistics. One became capable of absorbing a ton of damage, at the cost of losing potency and therefore attack power. The first dungeon floor was still trivially easy, but the second offered a decent challenge and let me actually allocate abilities in a way that made my party more effective. I especially enjoyed the boss battle on the second floor, which involved tracking the different buffs it applied to itself and dispelling them at the right times to deal a bunch of damage.

Then I reached the third floor, where the difficulty spiked once again. My first battle was against a necromancer and his undead minions, and they all had so much health that I could barely make a dent in their health bars even with my most powerful attacks. It was a battle of attrition that made me dread having to clear the rest of the floor, and I was actually relieved when my party was killed.

I think there are players out there who would really like Emberlight. If you enjoy tweaking lots of numbers and setting up synergies, such that chains of multipliers lead to hugely effective attacks, Emberlight is almost entirely about that. If you prefer your fantasy role-playing games to be a bit less overtly systems-driven, with a little more mystery and atmosphere, then you might bounce off of Emberlight as I did. Some quick googling suggests that players most often compare Emberlight to games like Slay the Spire or Darkest Dungeon, neither of which I’ve played myself, but both of which are very popular. I can’t speak to whether Emberlight captures the appeal of those titles, but if you bought the bundle you might give it a go yourself to find out. If you missed the bundle, Emberlight is normally sold for a minimum price of $9.99, but it’s on sale for $4.99 at the time of writing.