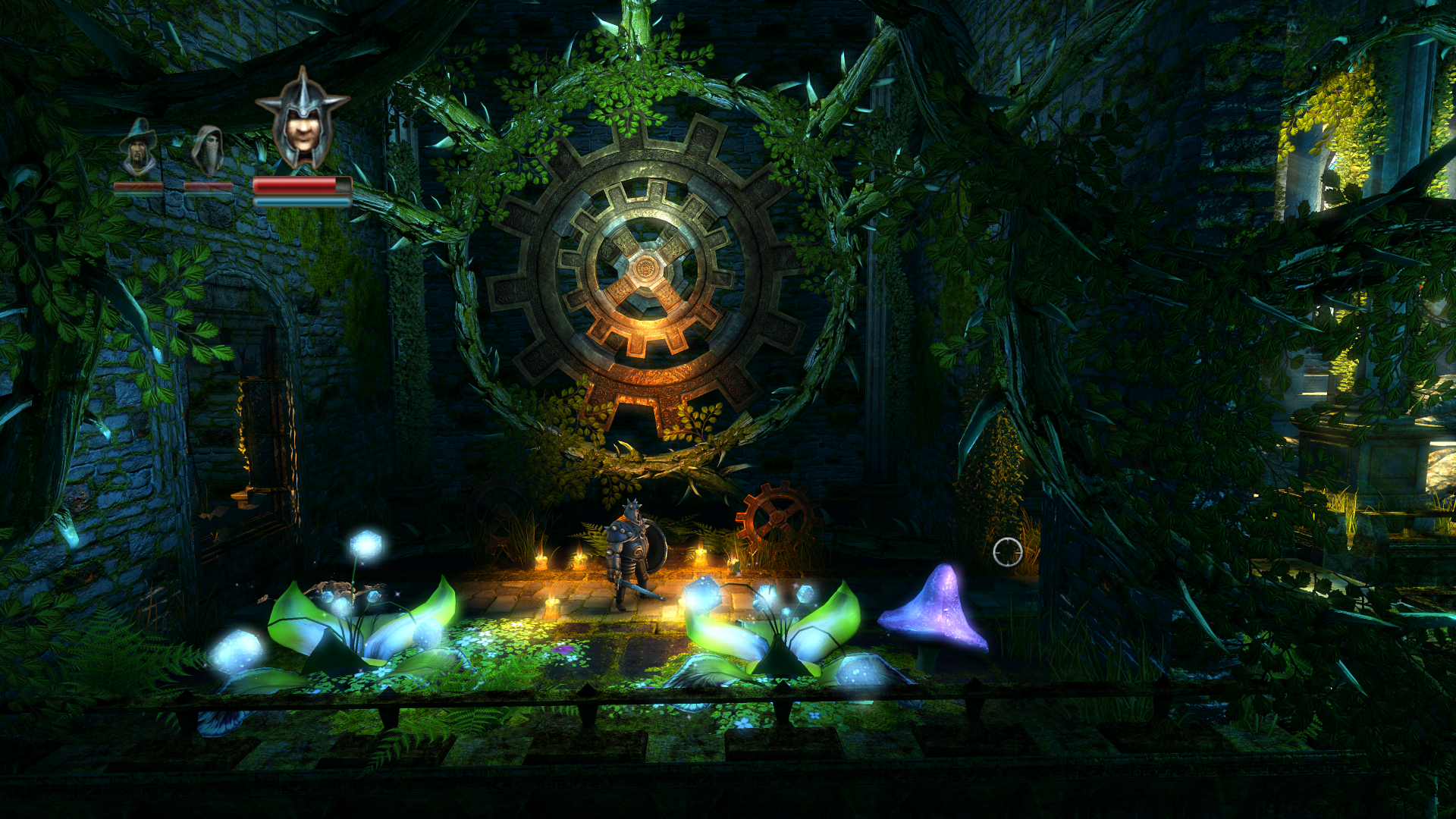 With the recent release of Trine 2, I figured it was time to play the original, which I’d been meaning to get to for some time. It’s made by the Finnish studio Frozenbyte, known for their excellent top-down shooter Shadowgrounds, and has been getting great press.

It’s easy to see why. The game looks gorgeous and has a great central concept: three characters, the Thief, the Wizard, and the Knight, have their souls intertwined by the artifact known as the Trine. They are merged into one being, with the player able to morph into each character at will. The game itself is a 2-D platformer set in a 3-D world, with various physics-based obstacles and puzzles that must be overcome by using each character’s unique abilities. The thief has a bow and a grappling hook, the wizard can conjure up objects to use as stepping stones as well as levitate certain obstacles out of the way, and the knight can smash skeletons and certain objects with his weapon or block projectiles with his shield.

If the concept sounds familiar, that’s because Trine draws clear inspiration from The Lost Vikings, the classic Blizzard title which saw players guiding three Vikings, each with unique abilities, through a 2-D puzzle platformer. But while that game had each of the Vikings present at once, with the player switching between them, in Trine the three characters are combined in the same person, morphing into each other when desired. The co-op mode (which I have not yet tried) lets each player control one of the characters independently, but even this mode differs from The Lost Vikings because all three characters are being controlled at the same time. 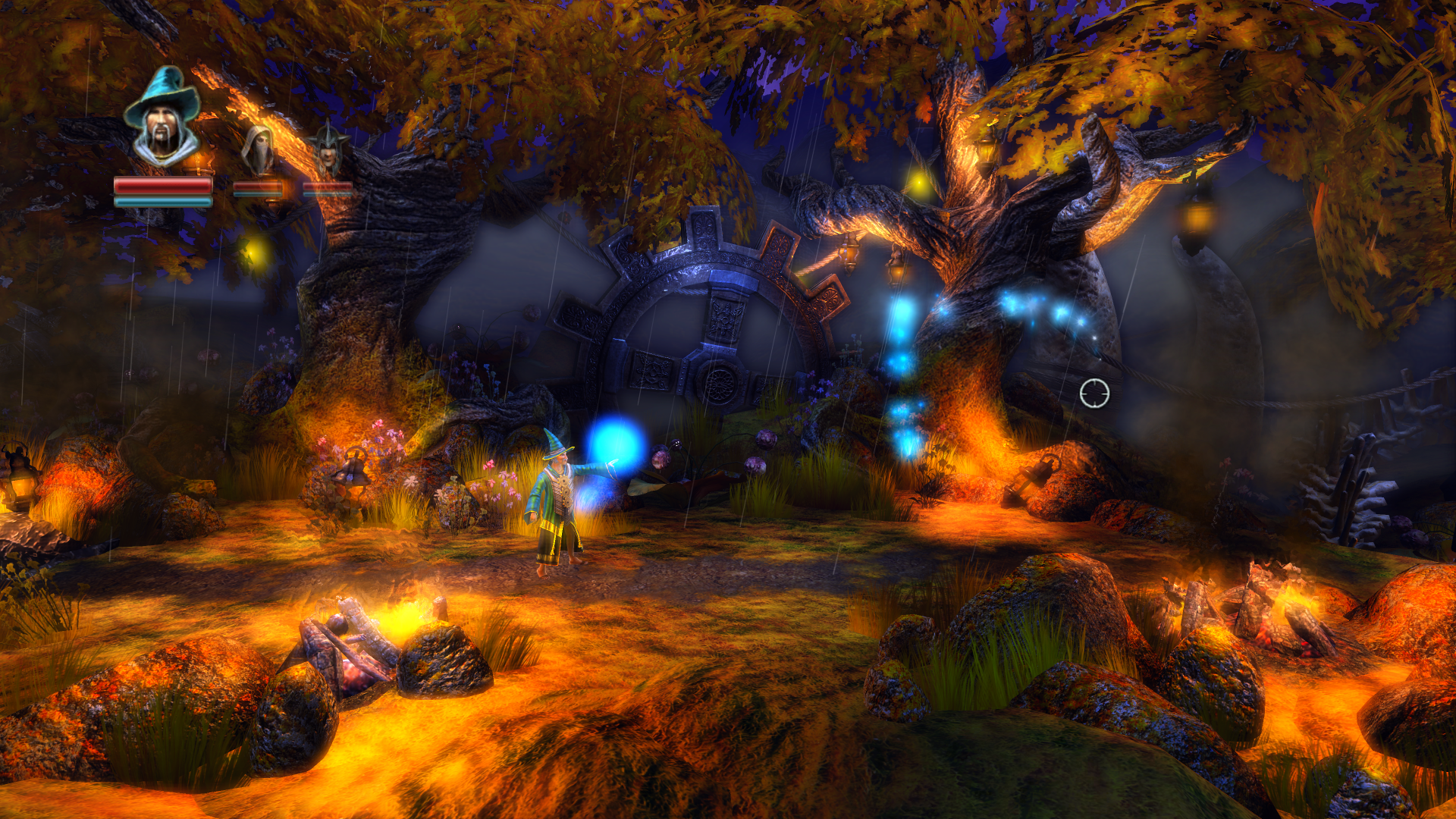 There are plenty more differences as well; Trine definitely feels like its own game, not a retread. The game has a fairy-tale feel, right down to the narrator who could very well be reading us a storybook and the over-the-top voice acting from each of the three characters. The gameplay is fast-paced, with puzzles focused on physics. Typical obstacles include rotating platforms, see-saws, systems of counterweights, and the like. In fact, I was expecting more variety in the puzzles, but Trine doesn’t introduce many new concepts as the player progresses through the levels, instead sticking to new puzzles with the same component parts. I couldn’t help but feel that more could have been done with the puzzle design to give a better sense of progression. I was also underwhelmed by the combat, which for the most part seemed unnecessary. The Knight has little purpose other than fighting the animated skeletons who block your path, and this quickly grows tiresome due to the lack of enemy variety. I will admit that the fighting got a lot more fun later on when I’d unlocked the knight’s more powerful abilties, but I would have preferred a firm focus on the puzzling.

These are minor complaints, though, because Trine is good fun and is short enough that the puzzles don’t get too repetitive. And, I must say, the game is simply a joy to behold. The environments are varied, colorful, and full of amazing detail. Waterfalls roar in the background, feeding streams that run under the bridge the characters are running across. Colorful flowers sprout from walls in the foreground. Immense systems of gears and pistons pump away as the characters navigate devious traps. Shafts of light from distant windows cut through the gloom. While the puzzles may not get much more complex as the game progresses, the environments are constantly changing, so there is always a beautiful setting to solve them in. 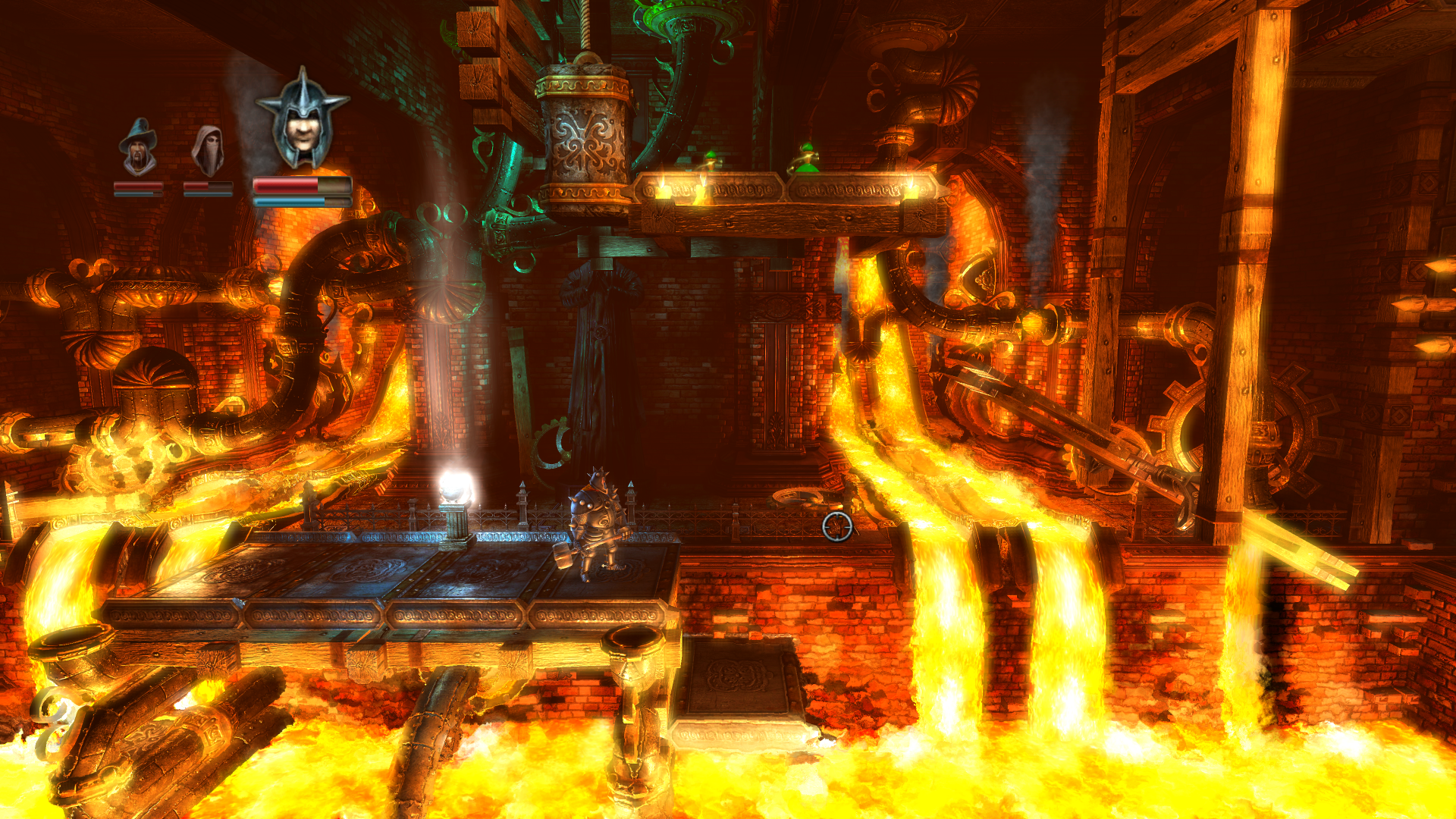 Many reviewers have claimed that the single-player game in Trine is too easy, with the Thief’s grappling hook enabling the player to bypass large sections of levels. In three-player co-op, each character would need to be able to get through, making things significantly more difficult. I did not find this to be as much of a problem as I expected. The Thief’s grappling hook is certainly powerful, but I found myself exploring most of the levels anyway because I wanted to find more experience potions to boost my character’s skills. There are also lots of secrets hidden away in the levels, mostly consisting of treasure chests containing items that provide passive bonuses to one of the characters. There are a few even-more-secret areas as well, that are very hard to find, which add a bit of replayability to the game. I am eager to try the co-op as well to see how much harder things get.

I had good fun with Trine, and would not hesitate to recommend it, but I am really looking forward to the sequel which promises more depth in its puzzles. Unfortunately, with my large backlog I will probably not get to it any time soon (it’s in the “post-Skyrim” category). You, however, should feel free to play both Trine and its sequel immediately if you so desire. Trine is available from a variety of digital download vendors and Trine 2 is as well. If an incredibly pretty, whimsical puzzle platformer sounds good to you, you won’t regret the purchase.

Master of the Wind Is Finished