Hanging Out With The Friendeyes In Cellpop Goes Out At Night

You may wish to read my post about The Real Texas before diving into this one.

The very first Keeping Score post that I ever wrote, around two years ago, was about The Real Texas. I’d finally been enticed to play it many years after my purchase, because a new mini-sequel had appeared, called Cellpop Goes Out At Night. I was already late then, of course. Cellpop appeared way back in 2016, and I’m only just getting to it now. It’s technically DLC (“downloadable content”) for The Real Texas, but developers Kitty Lambda (aka Calvin French) bill it as the first part of a sequel, with the full title “The Real Texas – Part 2, Part One – Cellpop Goes Out At Night”.

Players control Cellpop, a young friendeye in the small town of Par Suen. Friendeyes are a species of floating eyeballs who are, as their name suggests, very friendly. Par Suen is where the friendeyes who work at Kad, the nearby shopping mall, live. There haven’t been any customers in a while though, not since the comms went down and the trains from The City stopped. But, as Cellpop tells us in the introduction, friendeyes don’t look sideways, so they don’t worry overmuch. They’re sure the comms will come back up soon. 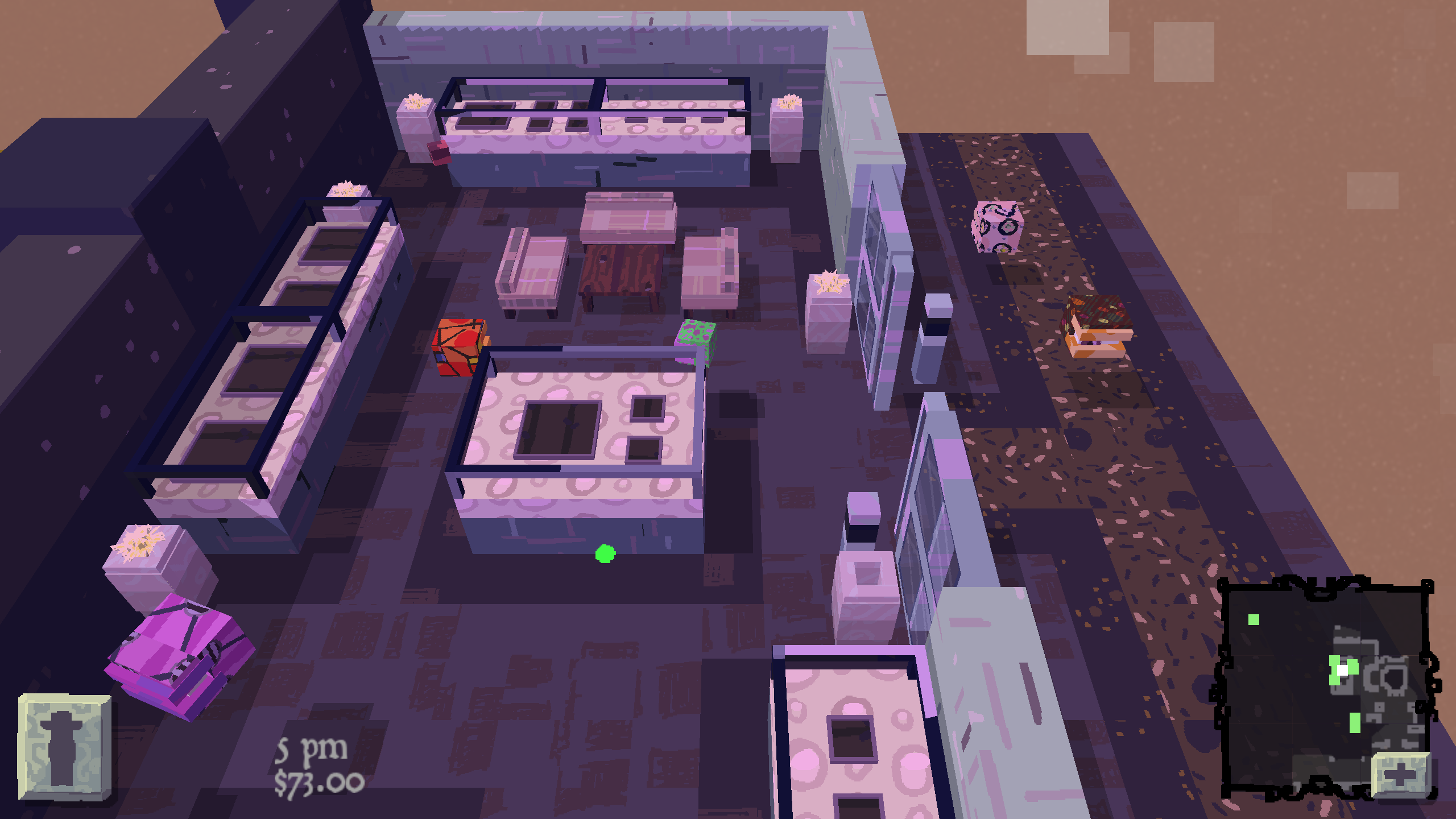 Par Suen and Kad are small areas, but just as richly detailed as those in The Real Texas. While playing that game I easily spent as much time poking around the town of Strange, Texas as I did working through the puzzle-y dungeon areas. Cellpop’s adventure simply extracts these exploratory wanderings and focuses on them. There are no dungeon areas, or even any combat at all. Just Cellpop let loose in her hometown, free to chat with her friends and neighbors and explore every little nook and cranny. True to form, these spaces are packed with incidental details and clues to find, revealing a little more about the community. There’s more direction this time, however, as Cellpop’s friend Sokpop (which might be a reference to the Sokpop game collective?) is always on hand to offer advice for what to do next. Progressing the story is a matter of following a sequence of tasks and errands, and the next step is usually clear.

But the heart of Cellpop Goes Out At Night lies between these moments, when players can simply wander where they please. The thought put into the location design is impressive. Par Suen and Kad feel more real than most locales I’ve wandered through in games, filled with stuff to rifle through. Most of it is boring — clothing, food, supplies — but it’s there, where you’d expect it to be, and among it are so many nuggets of story. Maybe someone has a letter from a loved one that they keep hidden away. Maybe there’s a stash of supplies hidden somewhere unexpected, or a valuable keepsake among a friendeye’s possessions, or suspicious notes left in out of the way locations. I found many of these things and I’m certain I missed many more. I heard hints that friendeyes were hoarding the best candies, out of stock now that the trains stopped running, but I never found any. Tzaradella at the jewelry shop happily explained about the different types of gems and how much she would pay for them, but I only ever found one. 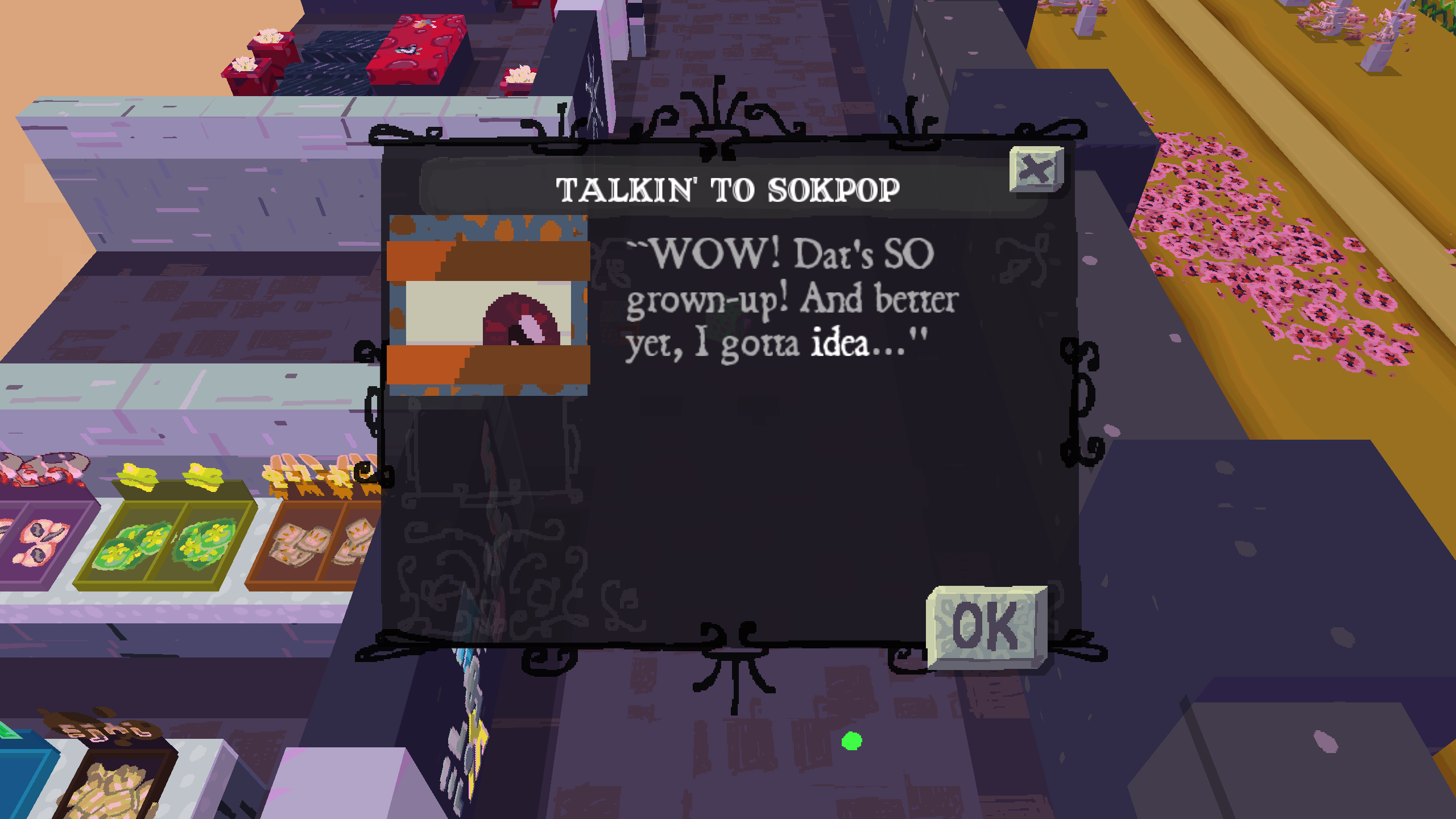 I was OK with this. Players who like to find every last thing are free to do so, but there’s very little pressure in Cellpop Goes Out At Night. I could have snuck into neighbors’ houses and stolen their valuables, but I didn’t want to. They all seemed very nice. If I stumbled upon someone’s prized possession, I usually left it where it was. Like The Real Texas before it, the writing in Cellpop Goes Out At Night is excellent, establishing each friendeye within the community and making me care about each of them. Cellpop is young, but just starting to understand what’s going on with the adults around her, and through the course of the short story I learned a lot about the decidedly human fears and desires lurking beneath the friendeyes’ cheery demeanor. The comms have been down for too long, and friendeyes are starting to worry despite themselves.

Cellpop Goes Out At Night is constructed with the same engine tech as the original The Real Texas, and therefore looks nearly identical. It has the same blocky art style, with friendeyes portrayed as floating cubes with big rectangular eyelids. The low resolution textures on everything create a blurred effect, like a painting. Yet from these crude pieces, characters are remarkably evocative. Their single eyes dart around and blink in a surprisingly lifelike manner, and everyone is easy to distinguish due to their brightly colored attire (friendeyes usually wear meshes and pins, and Charlit is happy to give Cellpop fashion advice). Environments manage to be evocative despite their low polygon count too. I found myself admiring well-decorated homes, or the arboretum on the top floor of Kad, both sharp contrasts to the desolate edges of Cellpop’s hometown, where a few lonesome weeds rustle in the wind. 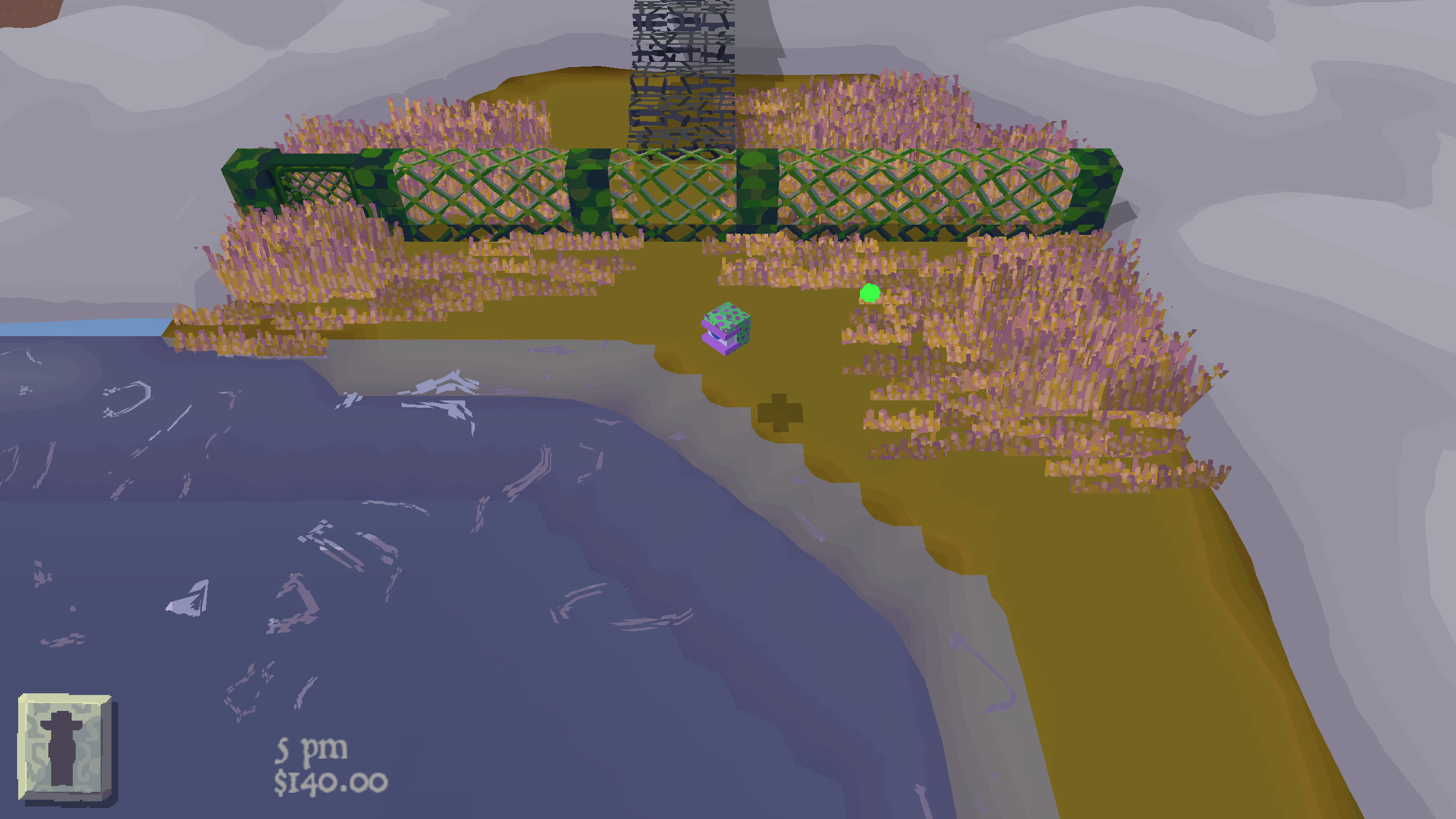 The clunky interface, however, is less enjoyable. I found it oddly charming in The Real Texas, as it seemed to model protagonist Sam’s clumsiness when trying to fish items out of his pack in the middle of a fight, but in Cellpop’s story the awkward inventory management is less thematic. Cellpop often must search boxes or cabinets for stuff, but it’s hard to tell what items are just from their pixelly, smudged appearance. Want to examine something more closely? Well, you can’t, not unless you pull it out of the box and into Cellpop’s inventory. But of course, her limited pack space is already full, of food (she must eat twice a day) and a quickly growing collection of keys. I spent a lot of time dropping things just so I could pick up a new item and examine it, learn it is something useless like a bar of fragrant soap, and then re-searching its container to put it back again.

That gripe is a consequence of telling a new, differently structured story within the same framework as The Real Texas. Other annoyances are not as easily explained. Specific friendeyes are often hard to find, as they go about their business according to their own schedules. That encourages the exploration I lauded above, but it eventually got annoying once I’d finished my wanderings and just wanted to see what would happen next. When talking to other friendeyes, players can type in their own conversation topics in addition to picking from a few relevant topics, but this pays off less often than it did in The Real Texas. Usually it just results in a generic non-response even when it should be a topic the friendeye knows about, like, for example, their own child. But in fairness, there are a few times when these “secret” conversations options do work, and they’re great. Wait, sorry, I was supposed to be complaining. Well, the constant need to eat or suffer drastically reduced movement speed can be frustrating, especially since food will clog up inventory space. And time moves quickly, so Cellpop’s wanderings are often cut short as she must return home to sleep. Sleeping is a holdover from The Real Texas, but the hunger system is new, I believe. It makes for a slower paced experience, not necessarily bad, but not for the impatient.

I also encountered some bugs. The first prevented the next part of the main story from triggering, I think because I spoke to another friendeye again about a task I’d alrady completed, and I’m not the only one to encounter it. I had to start over from the beginning, but it wasn’t far into the game so this wasn’t too painful. The second bug was at the end, when re-loading my game to explore other options left me with a black screen. I could still move around and interact with things, but couldn’t see anything. Quitting the game and restarting it fixed the issue. In the Steam discussions for The Real Texas, Calvin French admits that he was experimenting with a different style of design when making Cellpop Goes Out At Night, with less emphasis on testing, so some bugs like this slipped through.

Overall, however, I enjoyed Cellpop’s short adventure. The connection to The Real Texas is slight, to the point that I’m not certain exactly what it is. The Real Texas is an uncommonly memorable game, but even so, I’ve begun to forget some of the details of its tale two years on. There are (spoiler alert!) some floating eyeballs in The Real Texas, but I’m not sure if they’re actually friendeyes. Cellpop hears about a specific person from outside her community who may have been an important character in The Real Texas, but while I can picture the character in question I’ve forgotten their name. I’d hoped to find a refresher for the events of The Real Texas online, but the Kitty Lambda forums (the most likely place to find such a thing) seem to not be fully functional, failing to display most posts. The upside to all this, of course, is that Cellpop Goes Out At Night can be enjoyed by those who haven’t played (or who haven’t finished) The Real Texas, and easily stands alone as its own story. If you’re in the mood for something weird and a bit contemplative, you could do worse than this little adventure. And, true to its full title, it leaves room for a Part 2 to appear sometime in the indeterminate future. I just hope it arrives before I forget the details of Cellpop Goes Out At Night too.

The Real Texas is available from various online retailers including Steam, the Humble store, GOG, and itch.io. The Dusty Skies Edition comes bundled with Cellpop Goes Out At Night, and some storefronts also include the soundtrack (available for free separately as well) which I wrote about in the inaugural Keeping Score post two years ago (but not, sadly, the new music from yesso that graces Cellpop’s saga). I recommend playing them both.

Scratching That Itch: 1-6 Oozes In The Dark

Scratching That Itch: From Orbit